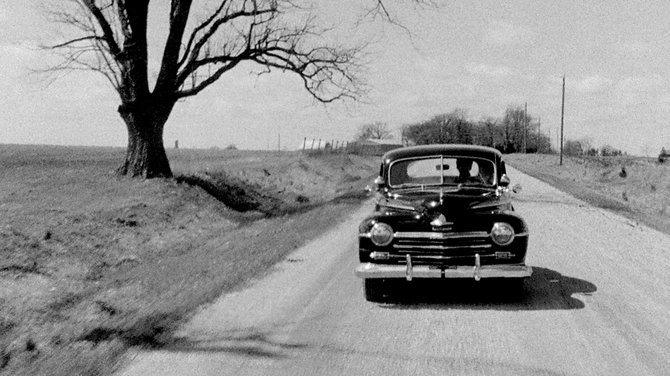 “Lomax” tells the story of Alan Lomax’s journey around the country in a big Plymouth car, recording music.

Alan Lomax's role in the preservation of American folk and blues music can never be understated. Lomax traveled around the country collecting interviews and songs for the Library of Congress in Washington, D.C. He didn't do it in the luxury of a recording studio; he did it from his car with about 500 pounds of recording equipment in tow.

In 1941, Lomax's travels brought him to the Mississippi Delta, where he discovered and recorded the likes of Mississippi John Hurt and Muddy Waters, among others. Aside from their historical significance, these recordings are some of the most harrowing sounds ever committed to tape.

Jesse Kreitzer's short black-and-white film titled "Lomax" explores what one of these recordings might have been like.

Alan Lomax, played by musician and actor Georg Koszulinski, is sent to Bill Henley's homestead by someone in town. "Don't many folks get this far out," Henley (played by James "Tail Dragger" Jones) says, surprised by this visitor in a large Plymouth.

Lomax conducts his interview with Henley and then asks if he can record the elderly blues singer. After he hooks up the heavy mobile recording gear to the car's battery, Henley performs a blues song a cappella dedicated to his old mule. Lomax plays the recording back to him, and Henley seems surprised by the sound of his voice.

The film is short, but it gives the audience a real sense of Lomax's important work. He obviously worked very hard to locate these artists just to record them. Aside from the music itself, you can hear the cicadas in the distance and the creak of the old house where Henley resides.

Viewers are transported to another place and time, thanks to Kreitzer's details.

"Lomax" screens at 5 p.m. April 6 on Screen B along with "Brasslands."