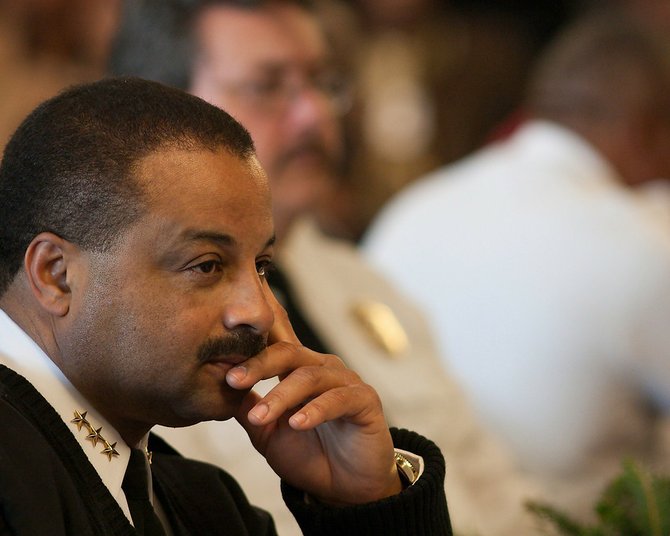 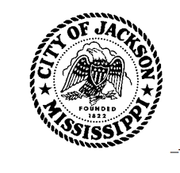 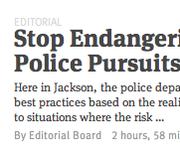 The JFP Editorial Board urges suburban police districts to adopt stricter and safer police-pursuit policies—and to stop spreading the danger into other jurisdictions.

The Mississippi Bureau of Investigations is reviewing policies of the Madison Police Department after its officers engaged in a high-speed pursuit through the streets of Jackson on Sunday, Feb. 23. The chase of auto-burglary suspects, which began at the Jackson Target store at approximately 2 p.m., caused two auto accidents, left a bystander in critical condition and caused $30,000 in damages to a Jackson building.

The Jackson Police Department asked MBI to investigate what it calls a "hot pursuit chase."

"Madison police officers engaged in a high-chase pursuit without the authority or assistance of the Jackson Police Department. The Madison officers had no arrest powers for an alleged crime that occurred in the city of Jackson. There was no request for assistance to investigate a crime in Jackson," JPD said in a statement.

JPD Assistant Chief Lee Vance told the Jackson Free Press that the pursuit proceeded down Interstate 55 onto High Street where the first accident occurred. The pursuit continued, ending close to South Gallatin Street where the pursuit caused a second accident in which a truck slammed into a building. A bystander was injured as well.

Vance told the Jackson Free Press that the Madison police pursuit of auto-burglary suspects was too dangerous for the pursuit of suspects in a non-violent crime.

"If there is somebody that we are looking for that we end up having to chase because we know they have just shot somebody, we are far more prone to chase them than we would somebody that broke into a car," Vance said. "Both are felonies, but the difference is that the person that shot somebody, common sense will basically dictate: If they are willing to shoot one person they may be willing to shoot somebody else. So again, the public would be in greater danger if someone was running loose who had just shot somebody as opposed to if they had broken into somebody's car."

Madison police told the JFP that the suspects involved in the chase were already under investigation for a string of auto burglaries that took place the Saturday before in Madison. The suspects allegedly stole credit cards and used them at a Target store in north Jackson that same day.

Madison police identified the three auto-burglary suspects as Lemoyne Rakes May, 33; James "Joshua" Johnson, 27; and Yvette Blanchard, 46. Investigators with the Madison police are currently working to link the suspects with auto burglaries from their corresponding jurisdictions.

Vance said that the issue goes beyond the jurisdictional question; the main issue is one of public safety. He said JPD limits its pursuits to violent crimes. Several police pursuits in Mississippi over the last few years for suspects in non-violent crimes resulted in individuals being injured or killed.

On the morning of Feb. 5, 2012, a 38-year-old mother, Milinda Clark, died when a car, containing two individuals suspected of stealing about $500 worth of groceries from a Ridgeland Kroger, slammed into the woman's driver's side door at the intersection of Grants Ferry and Highway 25 during the Ridgeland police's pursuit of the suspects into Rankin County. Both the suspects and the police were driving close to 100 miles per hour on the busy streets.

On Oct. 26, 2013, a teenage girl died in a crash during a police pursuit that ensued when a car fled from police at a checkpoint in Kosciusko. Just last month, a two-car collision resulted after police chased two teenagers through Starkville for fleeing from police on Feb. 19, 2014—then charging them with felony fleeing from police officers.

Advocacy groups such as Chico, Calif.-based Voices Insisting on PursuitSAFETY estimate about one person dies each day in the U.S. due to police pursuits.

These often occur because policies are insufficient and between jurisdictions, and because the public and police officers spend too little time considering the consequences and high costs in lives of such pursuits.

"The Jackson Police Department policy regarding high-chase pursuits takes into consideration the inherent dangers of high-speed chases on the public thoroughfares. The facts that have been presented to date did not show that a criminal act occurred that would justify a high speed chase," JPD said when announcing the MBI investigation of Madison police.

However, Jackson police say that Madison made no request for assistance to investigate a crime in Jackson and that JPD officers were only contacted after Madison police were already on the scene at the Target store and initiating a high-speed chase.

"What it really comes down to is the safety of the public," Vance said. "That's our number-one concern."

Vance said that although he cannot speculate on how Madison police made their decisions that day, he believes police officers must abide by safe pursuit policies.

"This reminds me again of why most police departments have strict policies in relation to these things and strict guidelines that must be followed so that the public is not put in any unnecessary danger," Vance said. "That's the basis of most policies relating to these types of pursuits. Is what you're chasing this person for worth putting the public in some type of risk?"

sometimes no good deed goes unpunished. Thank you Madison Police Dept for your efforts to curb crime in our area. Who's surprised that the JPD would prefer to do nothing? geez. These people were suspected for a string of auto thefts and JPD says that they shouldn't have been chased.

It's not only JPD who says it. It's criminal-justice experts--and the family members of innocent bystanders, like Milinda Clark, who are killed by these pursuits. I assume you haven't lost a family member from one of them due to your post. I hope your luck continues.

esims, seems so easy to surmise JPD wanted to do nothing, until its history of high-speed chases is considered. Jamie Fowler Boyll died from injuries she sustained when a vehicle that was being pursued by JPD crashed into the side of her vehicle. The crime committed by the person JPD was pursuing was attempted check forgery. Hers, (J F Boyll), is the only death I'm mentioning, but even one death is too many. Innocent bystanders are entitled to protection, no matter the crime, but especially non-violent crimes.

Not to be the devils advocate in this one but it seems to me that there isn't much emphasis put on JPD's role in the whole thing. When Madison Police Department contacted them and told them there were some people suspected of committing several crimes who were presently trapped in a store committing yet another one, JPD could have had a car there in what? Two minutes? Instead, it would appear they ignored the request and let the Madison Police Department, who deemed it important enough to send two cars, drive down through the construction thus giving the people plenty of time to get out of the building and into their car before they were spotted. I'm not sure why any criminal would pull over when they know that simply speeding up will end any pursuit by JPD but that's another story for another day. Apparently Madison was out of their jurisdiction and have different rules of engagement in a pursuit case. And apparently it was the wrong thing to do according to officer Vance. But I for one consider myself very lucky to live in a city where the police department would go to that much trouble trying to solve a crime. They send two cars in an attempt to make an arrest and solve a problem in Madison through traffic and construction. Meanwhile, yet another crime is being committed in the city of Jackson against it's tax paying residents and JPD decided it wasn't important enough to bother with. At the very least they could have been considerate enough to help another department.

I'll say it again that I think JFP's constant belittlement of those who leave Jackson seeking shelter from crime in the suburbs is both vindictive and petty. I cannot think of a single instance better than this one that justifies anyone's decision to leave Jackson and in the future I think it would be a little more responsible to point out how JPD could have made all this a non issue by simply doing their job.

Scott1962 where is ANY verification that the Madison pd contacted JPD prior to arriving at target? Their word? Yeah right! No matter how you try to spin it you can't justify their wrong. Madison pd will be liable alone for the health and well being of the innocent bystander and the business that was damaged. Spin that!

@Scott, if what Vance said is true, then how could JPD do their job if they're not being told of possible criminal activity? I don't mind Madison police being involved if they did truly did contact JPD. Imagine the fallout if JPD went to, say, the Walmart in Madison and arrested someone without seeking MPD's assistance/permission.

I support my local Madison PD, but if JPD would have pulled a stunt like this I would be pissed so would most of the people defending them for their actions.