Loving All Over Hobby Lobby 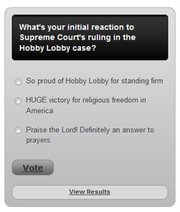 In September 2012, the American Family Association sent an action alert to its followers, urging them to support Hobby Lobby in its quest to deny insurance coverage of some contraception and to send letters of encouragement. In 2013, the AFA proclaimed Jan. 5 as "Hobby Lobby Appreciation Day," and asked readers to shop at the craft store.

When SCOTUS ruled in favor of Hobby Lobby, allowing the for-profit company to remove from its health insurance coverage certain kinds of contraception plans it says goes against its religious conscience, the court confirmed that RFRA protects not only people, but businesses, too. While this ruling only applies to "closely held" corporations, they are 90 percent of corporations in the U.S.

AFA calls this decision a victory for the organization's main cause: religious liberty.

In a July 1, 2014, press release, AFA president Tim Wildmon stated, "We applaud the Supreme Court justices who thoughtfully considered this case and ruled on the side of freedom, as well as the attorneys who spent so much time and displayed so much passion defending religious liberty. Finally, we thank the Green family who so heroically fought for their constitutionally protected rights and the rights of others."

AFA's news organization, OneNewsNow, allowed readers to weigh in on the issue through a poll that asked: What's your initial reaction to Supreme Court's ruling in the Hobby Lobby case?

They didn't give voters much of a choice, though, allowing them to be proud of the decision; to declare it a "huge victory" or "praise the Lord" for it. They later revealed that the "praise the Lord" choice won out.

Four years ago, the American Family Association filled its followers with a similar sense of urgency about the personhood initiative with this alert: "URGENT: Your help is needed today! We must complete the signature gathering by mid-February 2010, if we want to get this on the ballot!"

Comparing abortion to the holocaust and slavery, AFA supported the personhood amendment, which would have given a fertilized egg full rights under the state Constitution, and directed readers on how to help gather signatures for the initiative. The group also gave $100,000 to Personhood Mississippi.

Voters rejected personhood in 2011 with a 58-to-42 vote after grassroots women's health-care advocates informed Mississippians about the unintended consequences of the amendment. This didn't stop AFA's Anne Reed from sponsoring a nearly identical initiative in 2013; however, that effort failed to garner the required signatures.

Another unintended consequence of Citizens United. I liked the bumper sticker I saw on a car one day that said, "I'II believe corporations are people when Texas executes one!"