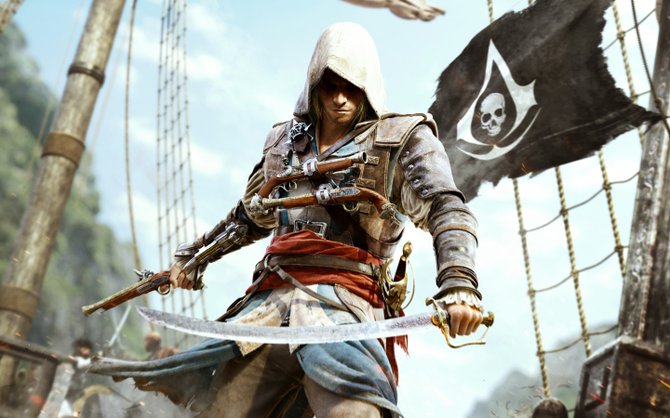 One could be forgiven for giving the side-eye to "Assassin's Creed IV." After all, it came on the heels of 2012's tepid installment in the series, and seemed set to be par for the course: another glorified expansion pack in Ubisoft's flagship IP, another shameless exploitation of an admittedly robust engine without much new content to offer.

In some ways, I suppose that's not too far from the truth. The problem with this critique of the game is that "ACIV" is so damn fun, it's hard to care.

A fundamental truth about the games in the series emerges as you're leaping from rooftop to rooftop over the streets of Tortuga: At its core, the "Assassin's Creed" series (and the Anvil engine beneath its hood) is incredibly well made.

That fact was proved when the ground-breaking (if uneven) "AC1" came out in 2007, given an exclamation point with the masterful "AC2" two years later, and hammered into our heads with all the sequels and quasi-sequels that have followed.

The movement is unparalleled, the attention to detail superb. The combat is crisp and satisfying, even if too simplistic, and the stealth, while not as dynamic as the rest, serves its purpose in an impressive range of environments. The fact that not much has fundamentally changed half a dozen iterations into the series can be grating when the result is a badly paced snooze like "AC3," but this time around, this installment mainly impresses.

It's possible that the exception to "Assassin's Creed"'s lack of new content makes this possible. Ship exploration and combat, one of the bright spots from the last game, returns as one of the central elements of Black Flag's gameplay, heavily expanded to fit the piratical theme of the game. Of course, the combat is well done, capturing both the physical flavor of booming cannons, billowing smoke, and splintering wood as well as the arcade-y glee of solid and even challenging mechanics. Sword combat in Assassin's Creed is basically an endless quick-time event, and the tactical elements of the naval battles add something that's always been missing from the series.

But more interesting, I find, is the game's exploration of the open sea as an actual venue of play. If that doesn't make sense, think about setting sail in the direction of a distant island and encountering a storm. The sea and the wind have a real presence in "Black Flag," the waves rolling off the deck as your underlings struggle to keep your ship sailing. It's such a compelling universe of human experience, and one that's never really received its due in gaming. "Black Flag" makes an admirable case for more nautical adventures that use the sea as more than an overworld to cross, but a physical place to experience.

Elsewhere, the game is exactly what you'd expect. While the series has always employed historical settings, it's better to think of history as a sort of brush that the game uses to paint its imagery (usually in the shape of enormous magical alien conspiracies). The game outside the game in this installment is particularly enjoyable, if only because established Evil Corporation Abstergo is now an almost entirely unveiled stand in for Ubisoft itself, complete with a self-deprecating in-game look at the cyclical formula of the series.

Arguments could be made that sequelization is stagnating the gaming industry, and that the comfort of big IPs such as "Assassin's Creed" is a deeply negative thing. Set those arguments aside for long enough to play "Black Flag." Trust me.