Resolution of the Day 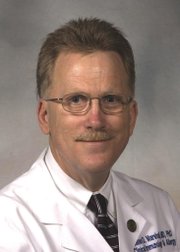 Now that it's 2014, most of us have probably set resolutions to try to get healthier. It's easy to talk about getting healthier, but often we set our goals too high. Once we fail, we find ourselves abandoning the goals altogether.

"The problem with the New Year's resolution is that it has such a finality to it that people are set up to fail," Dr. Gailen Marshall, professor of medicine and director of the Division of Allergy and Immunology at University Medical Center (2500 N. State St., 888-815-2005), said in a press release.

"A human being has a body and a mind. They have a spirit, and they have an emotional response," Marshall said. "So by the combined effort of ministering to the body, the mind, the spirit and the emotions, that is a total approach for the whole patient."

Dr. Marshall has advice in four areas for in keeping those resolutions:

"In today's world, we are under levels of stress that our parents and grandparents never dreamed of," Marshall said.

There are a couple of easy techniques you can use to help manage stress, such as making time for relaxation.

"It's amazing that we have to schedule time for relaxation, but you do," Marshall said. Making that time could be something as simple as getting up 15 minutes earlier to sit and relax for a bit.

Another stress-reliever is some form of meditation. People often associate chanting or sitting cross-legged with meditation, but Marshall wants people to know that it's much more than that.

"Meditation is a time for reflection," Marshall said. "Some people actually use that as a time of prayer."

When talking about proper diet, Marshall says we should listen to our bodies.

"Think about how we eat now. Many people eat in front of the television. They eat in the car. They eat at parties—we put food with everything," he said. "So you end up eating and eating, and you're ignoring your body saying 'that's enough.'"

In addition to eating smaller meals, keep in mind that if we eat more and exercise less, we will gain weight.

Regular exercise is obviously important as we age and our bodies adjust to the changes it brings.

"We ride the elevator, we sit on the couch, we drive the car, and we get de-conditioned," Marshall said. "We get out of the habit of exercising and try to get it all done on the weekend, then we injure ourselves, which is a further hindrance."

Try to find an activity you enjoy doing.

"It is estimated that two out of three Americans carry a chronic sleep deficit," Marshall said. This is the result of not enough sleep brought on by anxiety or stress.

"Just because you're unconscious doesn't mean you're getting rested," he said. Studies have shown that deep sleep is the most restorative to our minds and bodies.

"Goals need to be better defined, limited and with the realization that failures don't have to derail your plan," he said. "Don't punish yourself when you fail. The most successful people overcome failure with success."