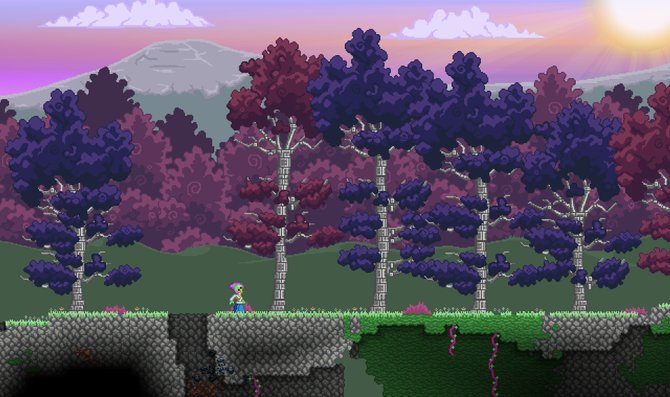 If you're familiar with the newer features of entertainment technology and software company Valve's digital gaming distribution system Steam, you probably know that it's a pretty good time to be an independent developer. Never mind the struggles of the big three game makers, desperate for the broadest audience (or in Nintendo's case, an audience at all)—indie gaming lets developers focus on features.

A good example is the 2D "Minecraft"-inspired "Terraria," a building and exploration title that traded the depth of three dimensions for a much more active and inspired combat system.

Well, part of that team has moved on, and the result is "Starbound," much more closely linked to "Terraria" than "Terraria" was to "Minecraft," but its own game in many ways. The concept here is that rather than generating a single enormous world to play with, "Starbound" offers a universe of randomly generated planets, features and settlements to explore. Instead of having an endless world that becomes impossible to navigate, or an ultimately walled garden with endpoints on either side, "Starbound" offers a middle ground. It allows contained control over an entire planet while still offering a cosmos filled with new land to conquer.

"Starbound" also boasts a far more populated world than either of its spiritual predecessors. Towns and cities, castles and dungeons—you're as likely as not to find that unexplored forest planet teeming with fellow Apex or Glitch, or Humans or any of the many races you're allowed to choose from for yourself.

And when it comes to building, this diversity pays off richly. Each race has a time and a place that inspires it: The Avians have their feathered, gilded, Mayan temples; the Glitch their robotic high medieval castles. Everything being destructible and collectible means that rather than scrounging for blocks to build something pretty, players will easily collect the materials they need for gorgeous, densely packed bases and constructions, including that lovely clutter that gives everything a much more realistic sense of place. Oddly enough, almost every item in the game comes with a different narrative description for each race you can play—a strange, but not unappealing feature.

This is where "Starbound" stands in its early open beta, which for indie games these days is typically the time of release. The omission you might be noticing is any and all other content. These games are regularly updated, so anything can happen in the next year or two of development but, as it stands now, both the feeling and implementation of combat and gear progression is that of, well, placeholders.

This is not merely due to lack of content. Combat in "Starbound" is frustrating and finicky, as the developers fret over balance issues and progression, and the end result for the player is a lack of any real reason to see the endgame—or lack thereof. Planets, too, have the big question of "so what?" hanging over them. Other than providing interesting settlements to deconstruct, there's not much reason to explore.

In that sense, even for a paid beta, "Starbound" may have been released too soon. There's a difference between a game that seems sparse on features and a game that seems almost totally bereft of them. But "Starbound" does have a spark of real creative value, and how that spark is cultivated will determine the game's future.