It's Carson, Foote In Ward 1 Runoff 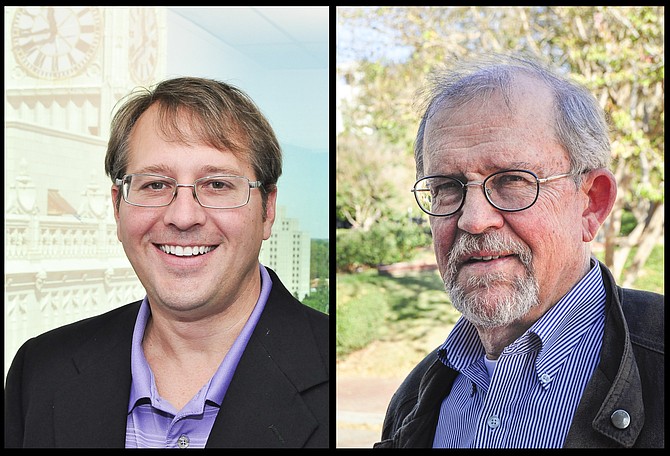 Dorsey Carson and Ashby Foote will face off in the Dec. 16 runoff. Photo by Trip Burns.

Dorsey Carson, an attorney specializing in construction businesses, edged out financier Ashby Foote for the top vote getter in Tuesday's special election for Jackson Ward 1 councilman. Now, the two men will square off in a Dec. 16 runoff.

Carson named economic development—recruiting businesses, retaining and recruiting the middle class—public education and public safety as top priorities during his campaign. Carson also wants to bring a public middle school to the ward, in northeast Jackson.

"The exciting part for me is that four years ago or even two years ago if you would have told me that I should run for city council, I would said not "no," but "hell no. Why would I go down there and beat my head against the wall?" But now we've got a new mayor who, whether you always agree with where he's going or not, he's going. And he's going in a direction with vision and with a desire to make real changes in the community," said of his decision to run for the Jackson City Council in late September.

Foote said he wanted to bring his financial background to bear on council deliberations.

"We need to focus on safety so that people consider that a safe place, just personally safe for business people and their clients because the clients have to feel comfortable to come down and visit a business, if it's an accounting firm, if it's a law firm, if it's an investment firm or if it's some other type of firm," he told the Jackson Free Press in a November interview.

Carson and Foote were also the top finishers in the money race among the six challengers.

Carson brought in the greatest amount of contributions at $53,000 from more than 100 contributors. Through Nov. 22, the reporting deadline, Carson spent $19,000 on his campaign, leaving him with almost $34,000 in cash on hand. Most of Carson's expenditures appeared to be for printing campaign materials and paying for consultants and meals.

Ashby Foote, founder and president of Vector Money Management, is running for the Ward 1 City Council seat with hopes of bringing financial knowledge to the city budget planning process.

Almost 30 individual contributors gave Foote between $250 and $1,000, with three giving $5,000. Businessman Leland R. Speed represented one of two $5,000 donations to Foote; C Spire co-founder Wade Creekmore of Ridgeland also gave $5,000. Like other candidates, Foote used a good chunk of the $23,600 he has spent so far on printing. Foote also gave $3,000 to Republican state Sen. Sally Doty of Brookhaven for campaign management and advising. Together, his contributions totaled nearly $36,000.

Foote made it into the runoff despite news that surfaced just before the election about state and federal lax liens that had been assessed against he and his wife, most recently in 2012.

Foote, who founded Vector Money Management, told the Jackson Free Press that the unpaid taxes were a result of getting behind during times of economic downturn.

While other investment firms were going through big lay-offs and going out of business, Foote explained that he made the decision not to lay anyone off at his small firm, "and that's one of the reasons we got into a bind on the tax liability." He said he has made a plan with the IRS to pay back what he still owes on the 2012 lien, a current balance of around $60,000 from the original total $75,763, over the next three years.

The special election is officially nonpartisan, although Carson ran unsuccessfully as a Democrat for a Mississippi House seat candidate and has contributed to Democrats, including President Barack Obama and former Rep. Travis Childers.

In his campaign advertising, Foote touts his own affiliation with the Republican Party and has also been a contributor to Republicans at the federal level, including during Secretary of State Delbert Hosemann's 1998 run for a U.S. House seat and, later, to U.S. Rep. Gregg Harper and former House Speaker Newt Gingrich's 2012 run for the White House.

Correction: An earlier version misstated the year Ashby Foote faced an IRS tax lien. It was 2012 not 2015. We apologize for the error.