Prepare to Die, Again: A Review of “Dark Souls 2” 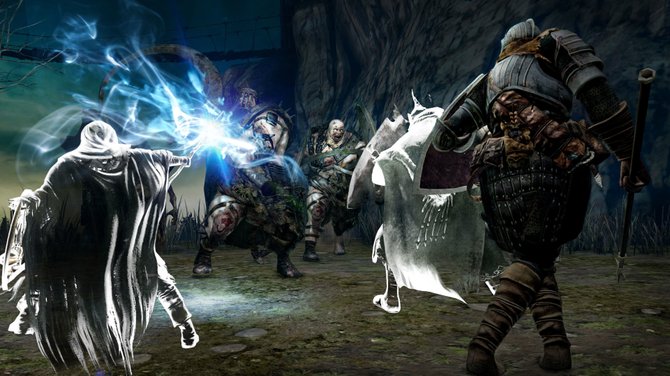 “Dark Souls 2” requires a more intellectual combat than the button-mashing style of many games on the market these days.

Twenty years ago, a minor Japanese game developer called From Software released the first installment in a series known as "King's Field." The game would never make it to the United States, despite being the Playstation's first RPG. To call it primitive is an understatement: The game is sparse, and the combat is painfully slow.

But what started with "King's Field" was a trend, a formula that would take decades to fully evolve. A few conceptual elements held true throughout the series, and into its spiritual successors, From Software's wildly successful Souls collection: dark fantasy, a thematic dedication to haunting loneliness, complex and labyrinthine worlds to explore, slow and deliberate combat—and of course, brutally unforgiving difficulty.

"Dark Souls 2" is the third entry in the Souls series, a further refinement on an already impeccably polished property. The first, 2009's "Demon's Souls," expanded the design into next-gen territory, updating the combat and introducing a number of key gameplay elements. Death in the world of "Dark Souls" is an inevitability, not an end, and both the narrative and mechanics make use of this. Perishing causes the player to drop all his unspent Souls (experience and currency rolled into one) into a bloodstain, and returns the player to the last activated bonfire. Returning to one's bloodstain restores what was lost; dying before this happens causes them to be lost forever. This has proven to be a brilliant mechanic with a lot of endurance. Death is both a learning experience and a heartbreak, and the potential for real loss only heightens the natural tension of the dark and haunted world.

What makes "Dark Souls 2" so incredible is the focus of the series as a whole: the combat. When people say "Dark Souls" is unforgiving, they mean a player does not get many advantages over the individual enemies he or she faces. Even with a solid set of armor and a meaningful investment in health, a few solid hits and the player is absolutely dead. This demands careful use of the game's defensive tactics: rolling, blocking, strafing, countering—sometimes turning and running the hell away. But all things are measured by the game's stamina bar, a green meter that degrades with every action other than simple walking. "Dark Souls" is the polar opposite of a button-masher—the combat is often cerebral, expecting the players to learn attack patterns (both of the game's countless enemies and many weapons), and carefully balance their offense, defense, and evasion against single opponents, mobs of enemies, and massive, tough bosses.

Both the setting and gameplay of "Dark Souls 2" are unique, then. But a further innovation is the subtle inclusion of multiplayer elements. A solidly single-player world, players connected to the Internet have a surprising number of gateways into seamless participation. The game is dotted with messages from other players, warning others of dangers ahead (or tricking them into jumping off cliffs). And players can cross over into the worlds of others, invading them in order to kill them and claim their humanity, or being summoned to assist them against bosses or to defend them from other phantoms.

"Dark Souls 2" is similar to its predecessor, refining many of its features for ease of access and expanded play. It is engaging, challenging and extremely fun. If you liked the first game, or if you're looking for a game that can test your skills, pick it up as soon as possible.