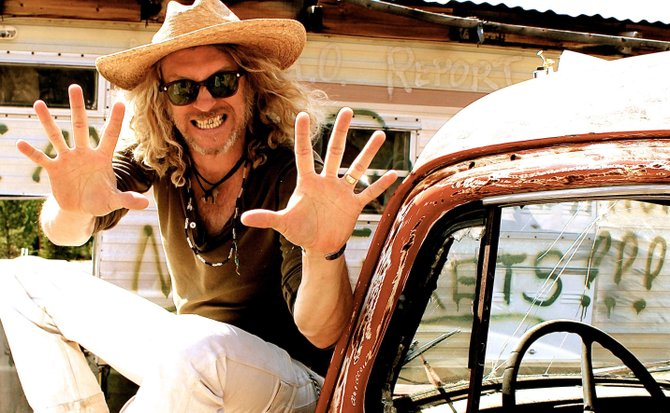 Jimbo Mathus is a living document of our state's rich musical history. Born in Oxford to musical parents, Mathus, now 46, learned about music at an early age. From playing with one of Mississippi's earliest punk/experimental groups, called Johnny Vomit and the Dry Heaves, to working with successful swing revivalists Squirrel Nut Zippers, Mathus has really done it all.

How did "Dark Night of the Soul" come together?

Right after "White Buffalo" came together last year on Fat Possum, Bruce Watson just started encouraging me to come by the studio. He's got his own studio there in Water Valley. He wanted to be start coming by and demoing songs, looking towards a new record. I'd go by about every two weeks and throw out a few ideas and put down sketches. He'd come in and listen. He really took over the job of listening and editing and helping me sift through my ideas, even as far as doing the sequencing and stuff. We'd ended up doing something like 40 tracks. A lot of the stuff that I thought were surefire slam-dunks, Bruce didn't care for as much, so I ended up trusting him in the role of editor. It was very freeing to let him pick what he liked. A year later, we had songs ready, and it had turned into this really interesting collection.

You've run a recording studio (Delta Sound) for a long time. What was it like to put your work in someone else's hands?

It wasn't too difficult. He uses a similar recording style. He likes to use the ribbon mics and tube pre-amps and recording live. His method is very much like mine. He basically just trusted his studio to me. Sometimes, he wouldn't even be there. He'd come in after work and just listen. I don't mind turning the reins over to people that I trust. Somebody like Bruce who has a vision and a plan and knows how to get it done, then all about turning the reigns over to them.

You've worked with some heavy people in music. What's the takeaway from working with someone like Buddy Guy?

I did two albums with him on Oxford, then did several years of on and off touring. I learned so much from his time on stage. Just watching him perform. I watched how he regulated his energy. He's very low-key throughout the day, and you could he was just saving it all for the show. I think it's a very powerful thing for a musician to have that kind of focus. When he hit the stage, he'd let it all out. It was a great respect he showed the band and the audience.

Can we talk a little about your work with the late Jim Dickinson (Bob Dylan, The Rolling Stones, etc.)?

He's where I got my production style from. I first found out about him through Luther (Dickinson's son, member of The North Mississippi All-Stars). When we met, he immediately wanted me to play trombone on a track for the album that became "Free Beer Tomorrow." He started using me for stuff on his records, and then I started using him to help me with stuff I was writing then. We'd go down to his studio in Coldwater called Zebra Ranch, and we'd be popping and always doing something. He really enjoyed the velocity behind recording. He'd call it making your cave painting for the ages. Recording took on a importance rather than just getting through it. At least every week I think of something he would say and remember him. He knew everything about Memphis music. That was his thing. All roads go through Memphis.

You've represented our state very well to the rest of the country. Do you ever feel pressure as an ambassador of Mississippi music?

We just did the Governor's Awards in which Gov. (Phil) Bryant has proclaimed this year as "the year of the creative economy." I don't know what the hell that means exactly. I will say this: I have friends that live in other parts of the country that can't make nearly the living I make playing music here in Mississippi. You can make a good living making the music the way it ought to be made right here. Music is social, and Mississippi has that culture where people like to go out and want to be entertained. We may be behind the times in that regard, but for a guitar player, it's pretty great. I love it. I love reading about and studying the history of it. I love knowing where my music comes from. I love knowing how it influenced other musicians in other places. I have deep ties with it through my family.