The Souls of Windsor 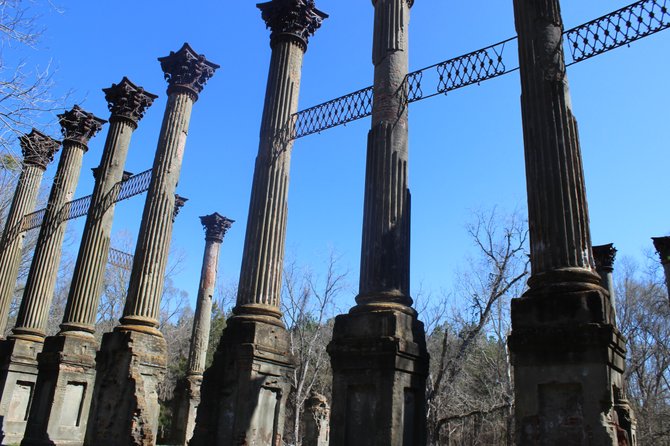 Ignorance is bliss for most of the ancestrally indigenous people who live and work at the doorsteps of Windsor Ruins in southwest Claiborne County near Port Gibson, Miss., because plantation life is a part of their history they would just as soon forget.

Going to Windsor turned out to be a road trip of curiosity and strange encounters. One could say I heard the history of Windsor straight from the horse's mouth--William Garbo, a landscape architect who created the drawing of what Windsor probably looked like before it burned in 1890, when it stood as the grandest antebellum home in Mississippi with a working plantation engaging approximately 500 men, women and children in slave labor.

Garbo took a vague sketch reportedly drawn May 1, 1863, by First Lt. Henry Otis Dwight, a Union soldier, as he remembered Windsor when he approached it on his horse for the first time during the Civil War (or as southerners call it, the Great War).

Recreating the drawing of the house was a labor-intensive effort, Garbo said. He spent numerous hours dredging through the six acres that Windsor now stands on. He also used historical papers relating to the Smith Coffee Daniell family, the original owners of Windsor, to get a sense of what the house might have looked like: a house with 12-foot ceilings, numerous bathrooms, indoor plumbing with cisterns and 25 bedrooms--each with its own fireplace--sitting on the vast acres of a working plantation.

"Creating the drawing was a difficult part of my quest to develop the abstract of the great house with 23 of the 29 original stucco-brick covered Greek revival columns, and the colossal cupola with several windows--which was an ideal observation point for Union and Confederate soldiers atop a hipped roof," Garbo said.

As I drove down the infamous Highway 61 on the Mississippi Blues Trail to see the ruins, strange thoughts began to creep into my head of my ancestors working on the massive land tract: field and house negroes with no sense of ownership longing for a land they would never see again, knowing they were lost in a sea of servitude with little to show for their effort except subsistence in a world they only made better for others to enjoy.

The road leading into Windsor was strangely similar to my present-day rural community in Attala County: lined with mobile homes along both sides of the Pinebelt highway, with silky Loess soil underneath, the kind that was ripe for growing cotton in the latter days of the Civil War.

Going further into what felt like a lagoon, Windsor seemed to be elusive. The road appeared to have no end. Trees and ravines covered in kudzu stretched for miles trailing off to a narrow, roughly paved road. That road turned into a shady path lined with hardwoods draped in wild wisteria vines, leading up to the ruins of ornate, fluted Corinthian columns, with cast-iron capitals decorated with acanthus leaves.

Getting out of the car, I felt like a tiny insect juxtaposed to the 23 remaining 50-foot ghostly and melancholy towers. The massive structures seemed to peer down at me as I looked up at them. They filled me with reverence, as I could only image the physical might and muscle it took to raise them five stories high before the industrial age and the use of modern construction equipment. Reportedly, the slaves in the plantation foundry made the bricks that make up the columns.

Looking up so high made me feel dizzy and somewhat lightheaded, so I stopped for a brief moment to catch my balance before walking around the path hewn by the thousands of visitors who trek there.

My sister, Linda, joined me in my discovery of Windsor's architectural feat. Gazing closer at the gigantic columns, I couldn't help wonder what went on inside this great house, with regard to the slaves who lived and labored here. Our feet began to feel heavier with each step we took around the far east side of the mammoths--so heavy that we glanced at each other as to say, "Do you feel what I'm feeling?" My body started to feel uneasy and empty as I looked between the columns. Water began to fill the wells of my eyes and tears spilled down my face. Without any verbal exchange, Linda and I looked at each other and let out deep breaths, shaking our heads, squeezing each other's hand.

We kept walking around to the backside of what would have been the kitchen and living quarters of the slaves, denoted on the small granite plaque that sits at the entrance of the ruins.

Almost simultaneously, Linda and I said, "A lot of bad things and hard work went on here." We reflected on our own farm upbringing, cooking for 16 siblings in a small kitchen on 210 acres, compared to the hundreds that had to be fed daily on the 2,600 acres at Windsor. Rounding the north side of the ruins made us feel frightened by the isolation of the area, so we sped up, heading back to the parked truck before we encountered the souls of Windsor Ruins.

Travel Notes: Windsor Ruins is approximately 85 miles from Jackson, located in Claiborne County. Take the Natchez Trace Parkway from Jackson to Highway 552 at milepost 30 and go west, following the signs to Windsor. It's good to take along a friend or a few because the Ruins are isolated.

Windsor served as a Union hospital after the Battle of Port Gibson in 1863 and burned on Feb. 17, 1890. Alcorn State University received the cast iron steps from Windsor and uses them now as the entrance to the historic chapel on campus. The Mississippi Department of Archives and History administer the Windsor Ruins, which are open to the public. Take a camera!