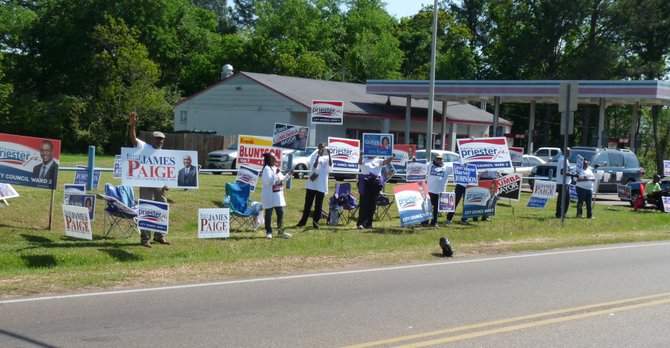 The Jackson Free Press is hearing about a number of Election Day issues that seem to be associated with the use of new voting machines. Photo by Tyler Cleveland

The Jackson Free Press is hearing about a number of Election Day issues that seem to be associated with the use of new voting machines.

This morning, the Jackson Free Press received a tip about issues at Ward 7's Precinct 97 in south Jackson, located at the Wahabi Shriners, 4123 Interstate 55 S.

The precinct is supposed to have one voting machine to read hand-marked ballots and count the votes. The machine, which poll workers said was scheduled for delivery at 6:15 a.m., didn't show up until 8:43 a.m., nearly two hours after the polls opened. And then it didn't work.

In April, after a months-long process, the Hinds County Board of Supervisors agreed to a $1.2 million five-year contract with Electronic Systems and Software for new voting machines. Headquartered in Omaha, Neb., ES&S also holds a contract with the Mississippi secretary of state to facilitate overseas and military voting.

Jackson municipal Clerk Brenda Pree said through a news release that the voting machines are "the nation's most widely used paper-based digital precinct scanner with more than 15,000 units in use."

Poll manager Jessie Tyler, who has volunteered at the polls for 20 years, added that elections usually come off like clockwork at precinct 97.

"When you change something, you have to get the kinks out," Tyler said.

As poll workers waited for a technician to fix the machine, they collected voters' completed ballots in a sealed folder. Ward 7 Jackson City Council candidate June Hardwick was at the precinct this morning, and she was upbeat about her chances.

"It's time for the baton to be passed on to the passionate and energetic," she said.

Hardwick was also a bit dismayed at the polling problems.

"In 2013, voting should be a well-oiled machine," Hardwick said.

By 10 a.m., the Precinct 97 machine was operational. Tyler, the poll manager, said the technician who set the machine up this morning failed to properly connect a power cord.

Meanwhile, at Callaway High School, where Mayor Harvey Johnson Jr. cast his ballot, a voter machine had been down, but was fixed by around 10 a.m.

In the Facebook post this morning, the campaign of incumbent Jackson Mayor Harvey Johnson Jr. erroneously told voters "you must vote for ALL of the Municipal Executive Committee Members... or the voting machine won't accept your ballot."

McInnis said that the machines will give voters a chance to correct or cast ballots for any positions they might have missed, similar to an "Are you sure?" message on a computer when you choose a command that might delete or change a file.

Voters do not have to vote in every race on the ballot, however. If they choose, they don't have to cast a vote for anyone at all. Every ballot will count, he said.

Melissa Faith Payne, communications director at Friends of Harvey Johnson, the campaign for the incumbent mayor, says that she has updated the original Facebook post.

Poll workers at Callaway High School told reporter Tyler Cleveland that the machines will kick ballots back if voters don't fill it out all the way. In that case, voters must put the ballot back in and push a different button.

If you experience any problems, ask a poll worker to help you. That's one of the reasons they're out there today.