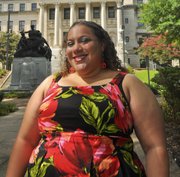 In my last column, I wrote about the importance of Medicaid expansion to our state--and specifically to me. Sometimes we pay a price for publicly sharing a story; my price was being told that I have no right to health care from complete strangers on social media. I have been told repeatedly if I am too poor, too stupid and too fat to be healthy, that is my fault--and if I die then that's just too bad.

These people are echoing the private and public statements of many lawmakers. It is strange to be attacked by the same people who claim to be moral standard bearers for everything from guns to my uterus in Mississippi. Most will tell me they stand on the side of the Christian God, yet, when it comes to policies affecting their fellow citizens' health, they seem to have traded Jesus for Ayn Rand.

One bright spot has been watching video of events in North Carolina, which has a lot in common with Mississippi, politically. It has a GOP-controlled House, Senate and governor's mansion, just like us. North Carolina's Republican elected officials are absolutely against expanding Medicaid, and they rail against Obamacare.

The difference in North Carolina, though, is that every Monday since April, faith leaders and community members have held protests against these policies. They're calling the days Moral Mondays, directly challenging the GOP's assertion that it is the party of Christian values and morality.

To Moral Monday protesters, it is immoral to disregard the condition of your fellow citizen. Instead, they believe the Christian God directs us to care for the least among us.

For those Mississippians who believe that the GOP lawmakers in control don't speak for them, it is time to speak up. Let Republicans know they aren't the only voice for morality in this state. Lots of us--from theistic and non-theistic beliefs--believe it is immoral to let working Mississippians go without health care. If you believe that these policies are wrong, write letters, make phone calls and start organizing. It's time to put boots on the ground.

There is an old saying, "Closed mouths don't get fed." Lawmakers can't hear what we do not say. When we don't have money or a lobbyist, our power is our bodies and our voices. It's time we use them, Mississippi.

Be well in all of our endeavors. Keep listening to your still small voice and sharing it with us. Thank you for that!

When you come to visit in WIlliamsburg, Virginia, let me know. The first round is on me.