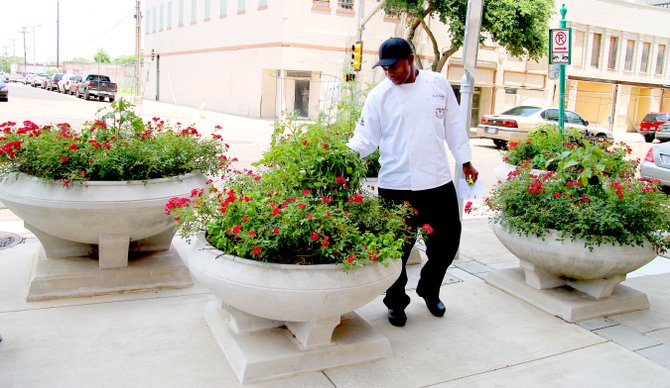 Chef Nick Wallace is cultivating an urban garden downtown to provide natural, organic ingredients to people in the neighborhood. Photo by Melanie Boyd.

When it comes to farm-to-table eating, chef Nick Wallace is putting his money where his green thumb is. The 34-year-old executive chef of the historic King Edward Hotel recently planted an urban garden on the grounds of the downtown hotel, growing many of the ingredients he will use in the kitchen there.

Wallace says growing food was part of his upbringing. "I knew I loved being in the kitchen starting at age 5. I grew up on a farm in Edwards, Mississippi, so I knew what it was like to live on the land," he says. "We used to walk with no shoes on. We knew which plants hurt and which didn't. We knew we could walk around our blueberry bush, and we knew that we were going to squish blueberries that were already on the ground while we were picking some. We had fresh chicken and fresh chicken eggs. The pigs were all natural. It wasn't like the slop-fed pigs that people are really scared of."

In the community where Wallace grew up, no one went grocery store shopping; they all shared their foods. If a family wanted Georgia collards, and one of the neighbors was growing them, the neighbor would share their collards.

One of Wallace's goals is to share his knowledge. "I'm not going to be here forever, but now my staff knows how to garden," Wallace says.

"We will forever have fresh food at the King Edward. I want to start a community garden. I want to start doing herb boxes, or gardening boxes all over downtown Jackson. I don't want to do it just to take the product off of it, or just for the profit."

Wallace says the garden is open to the community. Chefs or home cooks are welcome to come clip ingredients they need.

"If they need chives or things like that, instead of going to the store and getting a pound of them, you can come and see Chef Nick and get a sprig," he says.

The chef plans the garden around seasonal produce. It always has lettuce and some essentials, but he plants and harvests other foods, such as watermelon, seasonally, before using the soil for another ingredient the next season.

"I have a calendar that all my staff gets excited about because they can't wait for planting," Wallace says. "We've planted about 20 times already in the same soil, and it grows like Miracle-Gro."

So far, the garden has produced what Wallace calls "the big boy tomatoes," along with micro celery, four different types of tarragon, five different types of mint (including chocolate mint and pineapple mint), radishes, okra and more. Soon, Wallace plans to begin introducing bees. "We need the pollen to drop off from that and enrich the soil," he says. "I have a guy in Carthage that is going to help me with the bees. We're going to start producing our own honey."

Wallace has some advice for novice and seasoned gardeners alike. "Stay organic. Stay chemical free. I wanted to start a garden, but I didn't want to lose my roots. I wanted a piece of Edwards, Mississippi, at the King Edward. I went and got dirt from (Edwards) and potted it with the soil from Green Oak, which is one of our sponsors. Everything grows in the garden. I have to clip the leaves from my squash because it's growing so fast. It's crazy. Everybody comes in and asks what chemicals I use, but I don't put any chemicals in it. It's all natural."