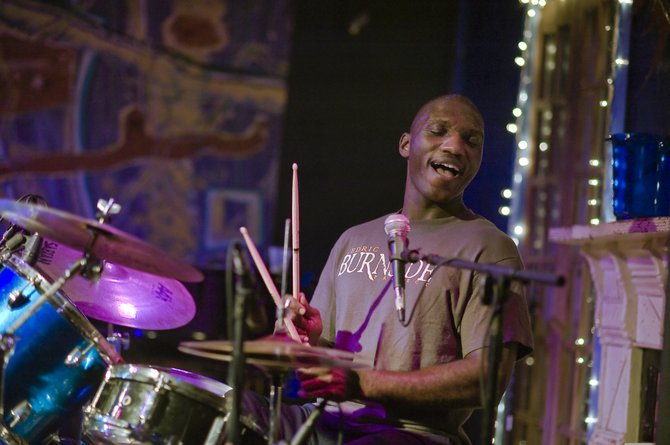 Cedric Burnside carries the mantle of Hill Country Blues made famous by his grandfather, R.L. Burnside.

When most people think of blues music, they usually think of what is called "Delta Blues." Names such as B.B. King, Robert Johnson and Honeyboy Edwards are synonymous with Delta blues. This particular style of music came from the flat, fertile farmland between Vicksburg and Memphis.

Going south from Memphis, turn left at Tunica, you'll discover the rolling hills of north Mississippi and the birthplace of "Hill Country Blues." It's an edgier style. The pattern isn't of the 12-bar variety most have grown accustomed to while listening to blues from the Delta. It's groove-based, and the music almost has a drone-like quality. It sounds dirtier and more raw than its more polished counterpart. In other words: Hill Country blues is dangerous sounding.

"I call it 'feel music'," Cedric Burnside says. "There's no time. The older cats just played until they felt like changing."

Names associated with hill country blues include Junior Kimbrough, Jim Dickinson and R.L. Burnside. If Robert Johnson was king of the Delta blues singers, then one might argue that R.L. Burnside might well be the king of Hill Country. Along with Kimbrough, R.L. could move the masses with just the sound of his voice and electric guitar.

Kimbrough died in 1998, and R.L. Burnside died in 2005. Like with most great artists, their music did not die with them. Their spirits are carried on with artists such as Kenny Brown and The North Mississippi Allstars. R.L.'s grandson, Cedric, formed Cedric Burnside Project as a direct continuation of R.L.'s legacy.

"I thank God and R.L. Burnside for giving me the gift and opportunity to play music," Burnside says. "I feel blessed to be carrying on the name."

Cedric Burnside Project's newest release, "Hear Me When I Say," features songs like "I'll Do Anything For Your Love" alongside instrumentals like  "Gettin' Funky." The music is almost so raw that you'll need ointment for your ears. The sound isn't a polished studio concept, but more of a live, in-the-room feeling. The songs also contain extended solos that usually predominate Hill Country blues. This is a group intent on carrying on the music they grew up with as well as exploring new territories.

Burnside played drums behind his legendary grandfather, but he also plays guitar.

"I've been writing songs since I was 12 years old," Burnside says, "but never really played out because I was playing with R.L. I was humming them out. I learned guitar so I could write. I've written songs on the drums, but it's easier on guitar."

He has played with the Grammy Award-nominated North Mississippi Allstars. The Allstars also feature royal musical lineage in Luther and Cody Dickinson, themselves the sons of legendary Memphis musician and producer Jim Dickinson. Dickinson's favorite phrase was his own prophecy, "World boogie is coming." I'm not sure if it's still coming, but his two sons, along with the Burnside family are intent on bringing it here. Any time these descendants get together to play, you can expect a raucous, glorious noise.

Burnside is proud of his heritage. "R.L. used to tell me to 'hang in there like a dirty shirt,'" he says. "That's what I try to do when I play. When we get to Jackson, I'm ready for it. We'll be jamming."