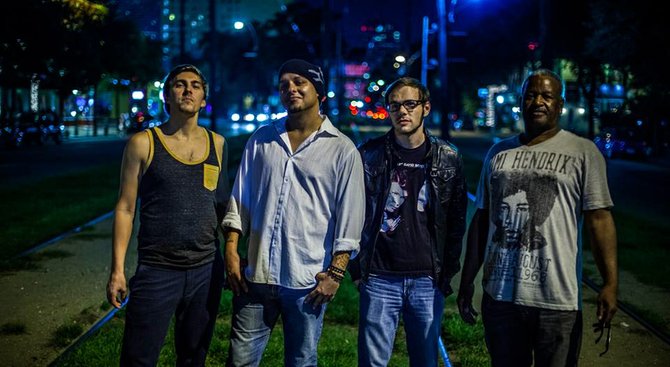 In 2005, Dustan Chiasson founded Remedy Krewe, which he describes as "a funk band with blues influences, playing like a rock band."

In 2005, Dustan Chiasson, 35, found himself in England making music, writing material that reflected his Louisiana roots. It was there that he founded Remedy Krewe, which Chiasson describes as "a funk band with blues influences, playing like a rock band."

Remedy Krewe consists of Chiasson on guitar and vocals, Micah Boswell on drums, Will Laird on bass guitar, Mikey "B3" Burkart on organ, and Lionel Batiste Jr. on bass drum and percussion. If Batiste's name sounds familiar, it's because he was one of the founding members of the famed Dirty Dozen Brass Band.

Chiasson, who is originally from Lafayette, La., moved the band to New Orleans in 2009, where it has been building a loyal fan base on the live circuit.

As for influences, Chiasson is quick to point out his love for British blues artists such as Robin Trower. But while the band's influences are varied, everything comes back to the musical gumbo that makes the music of New Orleans so unique.

Remedy Krewe takes a different approach to its live performances. "It's very much in the moment," Chiasson said. "It's like we are having a conversation on stage as musicians. We will follow each other, and takes the songs to new and different places. We love sharing that experience with the audience."

That shared experience is typical of New Orleans music. If you've ever experienced live music in the Crescent City, then you probably understand that something very special happens between an artist and the audience. Plus, it doesn't hurt to create a party atmosphere.

In addition to live performances, the band has been busy recording its debut album, "Soul Shaker." It is slated to be released in March on iTunes as well as the band's website.

"It's a blend of all the things we've been doing musically, and we're very proud of it," Chiasson said.

No two shows are ever alike with Remedy Krewe, and it promises to bring good times to whomever sees the group perform live.

"We try to bring positive vibrations to people that hear us play," Chiasson said.