Where No Kerbal Has Gone Before | Jackson Free Press | Jackson, MS

Where No Kerbal Has Gone Before 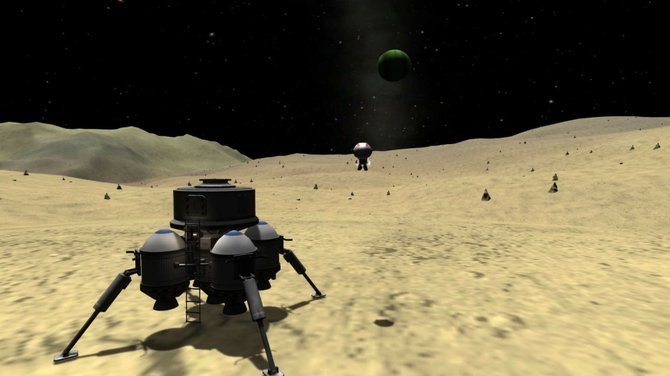 Experimental spaceflight is inherently tragic, isn't it? Beautiful and breathtaking, no doubt, but it's hard to escape the shocking reality that mankind's noblest scientific pursuit is essentially sitting on top of explosive juice and seeing where it takes us. That makes a game about experimental spaceflight probably a bit morbid, even for gaming. The fantastic "Kerbal Space Program" sidesteps this problem completely by matching a robust technical system with hilarious, cartoony charm.

While having players man a poorly designed spacecraft is probably gaming's most roundabout way of getting them to blow up little green men, it'll happen regularly in "Kerbal Space Program." But it's an exciting journey, whether your little green men explode on the launch pad, explode in the stratosphere or float aimlessly through space, cold and alone, before getting sucked back into the planet's gravity well careening downward, and then, inexplicably, exploding.

The concept of "Kerbal Space Program" is decidedly simple and open-ended like many of the best indie titles. As mission control, your job is to develop, test and fly the rockets that will take the industrious Kerbals to the stars. That's pretty much it. Success and failure are entirely player defined, although common goals include achieving a satisfying orbit, or accomplishing a landing and returning to the planet Kerbin intact.

Within these confines, the brawn of the simulator comes out. "Kerbal Space Program" is decidedly the most enjoyable spaceflight simulator out on the market—balancing quality physics with an incredibly solid user interface and a wry, fantastical setting that gives players an enormous amount of content to explore. In addition to Kerbin and its two moons, Mun and Minmus, six other planets have seven satellites between them. Planets range from the Mars-like Duna, covered in rusty desert, to the Venus-like Eve, a purplish sea-world with a thick, heavy atmosphere. While all the planets offer hidden content, it's the planetary features that add so much to the game.

The unique physics system encourages (and for anything complex, demands) that players use the basic concepts of real spaceflight: adjusting their apsis for gravity assists; monitoring their positioning and velocity with the help of a navball, which leads players to make slow, calculated maneuvers toward prograde and retrograde. (Typical videogame spaceflight is omnidirectional plane flight.) In fact, "Kerbal" is an excellent introduction to the world of spaceflight, evidenced by the NASA Jet Propulsion Lab's virtual obsession with the game.

Building the rockets may be a little less attached to reality, but the staging system is still relevant to actual rocket design. Players are, fortunately, free of any cost-benefit restrictions, because the entire culture of Kerbin is devoted to spaceflight.

The freedom is beyond enjoyable. Stick a few dozen rockets on your main craft. No, that's not enough. Stick another dozen on each of those dozen. Now you're cooking with Delta-V. Ignore the terrified screams of your Kerbals. They're dying for science.

That's pretty much the story of "Kerbal Space Program." It's a perfect mixture of work and play: the stress of careful engineering, the unbridled glee of flight, a constant flux between the ordered sanity of orbital maneuvers and the outrageous insanity of Jebediah Kerman backflipping out of a starfish-shaped bomb into the friggin' sun.

I don't just recommend "Kerbal Space Program"—I demand you play it. It's too precise, outrageous and brilliant to pass up.