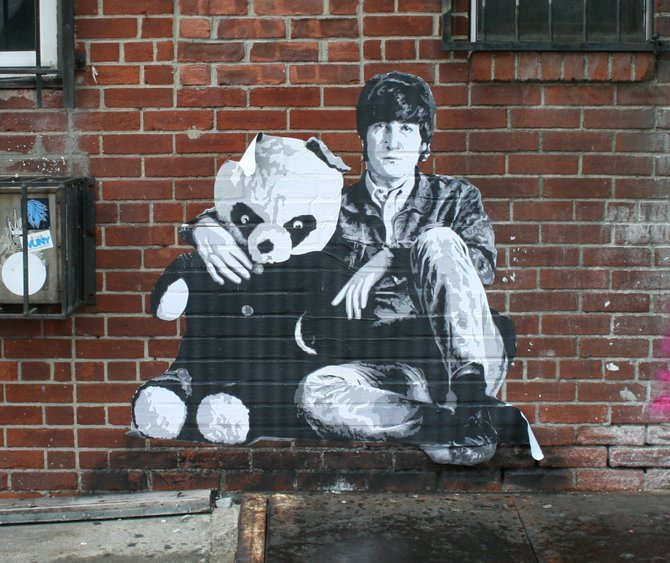 I always instinctively knew that John Lennon was my favorite Beatle. From the first time I saw my dad's copy of the "Hey Jude" album, I knew I preferred the "Lennon" half of Lennon/McCartney.

For some reason, I can't remember John's death. I know I was only 5 years old when it happened, but I was aware of music at that age. Perhaps it had a subliminal effect on my psyche, but it seems John's death should have been on my young radar.

When I discovered that LP in my father's collection, I was fully aware of Paul McCartney; he was still enjoying radio success with the likes of Stevie Wonder and Michael Jackson. Being a music fan, I knew the name "The Beatles" but wasn't familiar with the band's music. I remember eventually listening to "Hey Jude" repeatedly and trying to figure out who sang on what track. I felt proud that I could pick out John's cutting vocal delivery compared to Paul's sweeter inflections.

Once I reached 10th grade, I became a serious student of The Beatles and the band's history. In addition to discovering the music that influenced the members, I also paid close attention to their solo careers.

I bought a four-disc boxed set that focused on Lennon's solo years, and I was able to get a greater overview than a mere greatest hits collection could offer. The boxed set included material that was tuneful, political, satirical, rocking and funny. I realized that John was a true artist and was willing to follow his muse right off a cliff if so led. While he could boast a share of hit songs, he never seemed to let that be his sole reason for writing and recording. More times than not, he could frustrate his fans with songs that weren't afraid to go out on a musical limb.

John, at his worst, was always interesting at the least. He was certainly human and managed to release some bad eggs during his short solo career, but they still seem to demand a listen.

His politics seem a little naive to me now. As a young man in high school, I could totally relate to his visions of peace and understanding. I also paid attention to women's rights thanks to John. For the longest time, John Lennon was the face of the '60s counter-culture for me.

I also understood that his death brought about awareness for better gun control laws. In a world where John Lennon could be taken from us so suddenly, we had to react.

History has a way of rewriting itself, and many artists who were misunderstood during their time often become teachers for younger generations. Even in the early mop-top days of The Beatles, it's very easy to see how John Lennon would become a polarizing figure. Sometimes he was laughed at, other times he was lauded. Either way, he always seemed to speak his mind even at the risk of people burning his records. Plus, he could always write a great tune.

Sunday, Dec. 8, marks the anniversary of Lennon's death. His influence is still very present among his peers as well as young songwriters. Lennon's old partner, Paul McCartney recently told Rolling Stone magazine that he still talks to John when he's composing a new song. Even Bob Dylan says on his latest album "Tempest": "Shine your light, move it on, you burn so bright, roll on John."