City in the Sky 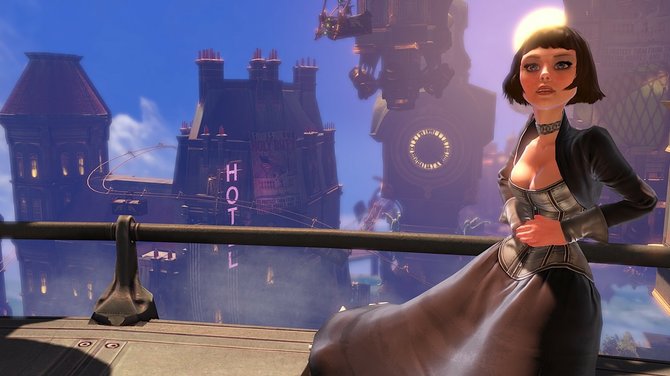 "Bioshock Infinite” is a welcome, but flawed, addition to the Bioshock series. Photo by Courtesy Irrational Games

The long-awaited sequel to the critically acclaimed "Bioshock" series is finally here, and despite its flaws, it was worth the wait.

An action-FPS with an adventurous bent, "Bioshock Infinite" remains thematically in step with the series' previous entries. Each portrays a secluded, retrofuturistic city-state ruled by a failed ideology of the past. The original presented us with Rapture, an underwater Objectivist utopia in the grip of the domineering capitalist Andrew Ryan. "Bioshock Infinite" offers a necessary change of venue, now sending the player to the floating city of Columbia, the lofty, heavenlike manifestation of early 20th-century American Exceptionalism, inhabited by fanatical religious revivalists, unctuous captains of industry, battle-scarred cavalrymen and a roiling underclass of the oppressed and abused--the Vox Populi.

The city of Columbia is a masterpiece of artistic design, a gorgeous neoclassical metropolis spread across the clouds. City sectors are linked together by skyrails, softly bobbing in the air currents. The feeling of flight is often palpable, and some of the landscapes provided by higher or lower city levels are breathtaking.

The combat is as competent as it was in the first "Bioshock," but lacking in much of the terror and claustrophobia that made it so thrilling. The player chooses two primary weapons and two magical powers, called Vigors, and does his best to wage asymmetrical warfare on the many authoritarian peacekeepers of Columbia. "Bioshock Infinite" really only seems to drag in a few places, and that's thanks in part to the game's relatively brief length, as well as its constant engagement of the player-character as an prophesied agent of catastrophic change.

The more personal narrative of "Bioshock Infinite" is that of Booker DeWitt, a drunken and disgraced ex-Pinkerton agent under mysterious employment to rescue a girl named Elizabeth from the grasp of Columbia's prophet-ruler, Father Comstock. DeWitt's past and his evolving relationship with Elizabeth are the focal point of the game's plot, as are Elizabeth's mysterious, reality-warping powers. The character of Elizabeth, like the primary companion of any first-person-shooter, has a demanding role to fill. A perfect balance has to be struck between activity and passivity, to avoid either shutting the player-character out of the story or presenting a weak and ineffectual deuteragonist.

In this, "Bioshock Infinite" performs admirably. Elizabeth is neither passive nor monopolizing, and after an initial stint as a fairly uncomplicated damsel-in-distress, her character opens up to become a valuable mirror to the human reflections of the city of Columbia. Where Booker grunts and marches through wave after wave of enemies, Elizabeth offers a more empathetic perspective. It's an odd fellowship, but with an abundance of charm and depth.

"Bioshock Infinite" is a phenomenal game--deep, mature, with groundbreaking artistic direction. But there are reservations, here and there, negligible by themselves and yet troubling as a whole: the extremely poor, frankly tasteless transition of the Vox from ally to enemy; the sometimes nonsensical level design that at times feels like peaceful hub-worlds gutted and repurposed for linear progression; the outright neutered exploration puzzles, which are introduced almost immediately, revisited once or twice, and then discarded entirely; the creeping feeling, confirmed by the game's convoluted and surreal final act, that the grand human drama of Columbia will be discarded in favor of the game's more personal narrative. Together, it all smacks of executive interference, and I'm neither the first nor the last reviewer to notice this. Would a less streamlined "Bioshock" have been a more powerful exploration of an already visually and thematically arresting world, or just an overburdened, cluttered mess? We may never know, but the question will always remain.