Favorite JFP Moments: Yours and Ours 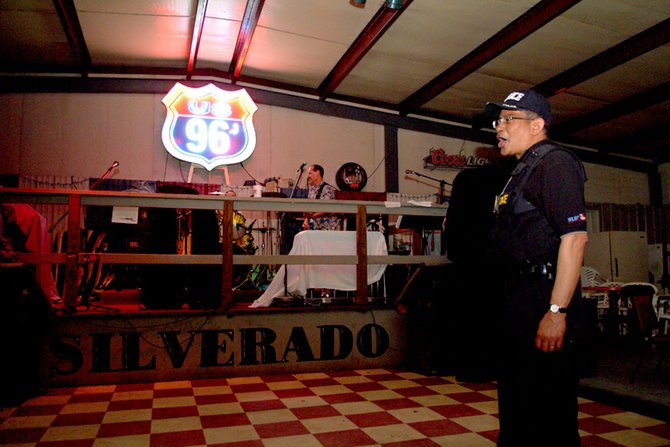 Frank Melton, smelling of liquor, sang a Willie Nelson song on the dance floor at Pops Around the Corner in April 2006 during a JFP ride-along. Photo by Jaro Vacek

As the JFP approached its 10th birthday on Sept. 22, 2012, we asked current and former staff and interns, as well as readers, to share their favorite JFP moments. Here's what we've heard so far; feel free to add your own!

"Jimmy Mumford telling me in email one night that he would be lying on the floor in front of his computer sleeping and to call him when I'd sent him another file to design."

"Sitting in the courtroom listening to the defense attorney trying unsuccessfully to keep the evidence I dug up out of former Klansman James Ford Seale's trial. Then, when I got the call while at an AAN conference in Portland, Ore., that he was convicted."

"Getting a letter from James Meredith a few weeks into publication in 2002 telling us how much he loved the paper. At first, I didn't believe it was him. Likewise, when he showed up at the paper's first birthday party in 2003—and then at my 50th birthday party in 2011."

"The day I heard that Frank Melton could no long carry guns or have minors live in his home—a result of our breaking the story about his duplex attack and our cover photo of him carrying a gun in a church while holding a baby. And, of course, my ride-alongs with Melton."

"My favorite JFP moment was when the JSU Sonic BOOM drum line was the surprise guest at the Best of Jackson party when we had it at the Mississippi Museum of Art. And the first BOOM fashion show (2010). Jeff Good slinging drinks, David Waugh working the runway and an after-party featuring DJ Phingaprint. Priceless."

"My best JFP moment happened only recently, when I received my first piece of journalism hate mail in response to an editor's note I wrote about the issues I care about in the upcoming election. The hate letter was filled with vitriol, agist and sexist remarks and plenty of jabs at my intelligence, education, personality and even appearance. After putting the letter online, however, I received an outpouring of support and defense from friends, co-workers and strangers. My hate mail was a great rite of passage—I've never felt more like a true journalist."

"Learning hands-on about narrative news writing and telling the human side of a story for the first time by visiting Grace House and writing all the details about the things I saw and people I met while I was there."

"Riding up to a little known address on Ridgeway Street way back in 2006. Following a tip, I was investigating an utterly annihilated duplex allegedly demolished by a very high-ranking Jackson official. I removed my helmet, gazed at one of the bemused neighbors standing next to me and asked: "who did this?"

"Mayor Frank Melton. That's who," she said, nodding industriously. "Yep, he sure did." "No, seriously," I demanded. "Who did it?"

"I'll never forget getting my car stuck when Adam and I went to look at the house on Ridgeway. Another favorite moment is when I had an ear infection, and we were worried that the office might be bugged. I couldn't hear your whispers, so we went out in back so you could yell the secret material at me. There was also the time Melton threatened to sue us. Or rather, the many times. I remember Melton's goon flipping us off outside of City Hall."

Casey Parks, former intern, then assistant editor and now reporter at The Oregonian

"Darren (Schwindaman building a mouse-trap, Donna lying on the concrete (in front of the building) saving a cat, Lynette (Hansen) being reborn as Curly Gee (named by David Banner's posse), sleeping at the JFP during Hurricane Katrina."

"For first my ever Jacksonian, I had the bright idea to interview "I'm-not-your-Mama," Mrs. Pat Fordice. So, I look in the phone book, find her number and call. She answered her own phone! And agreed to speak with me the next day. I vividly remember the out of body joy that flooded over me, quickly followed by fear that grabbed hold tight. I'd never interviewed anyone. Thankfully, Mrs. Fordice had been interviewed so many times that she was a pro. I sat in her lovely home, listening, taking notes, watching her, trying to remember all you'd taught me in Shut Up and Write!, Donna. I'm forever grateful to you two fine Mississippi women for giving me my start at the Jackson Free Press."

"The big-letter postcard cover of the Best of Jackson, 2004."

"The Rev. Ed King as Jacksonian."

"I've got another one. The first time I took my little Mama to Hal and Mal's to listen to Ezra Brown play (whom I had met through my association with the JFP), we walked in and found him sitting at the bar, eating and watching a movie on his laptop. My Mama climbed, with help, right up on the stool beside him and struck up a conversation he couldn't resist. They remained fast friends, at the mention of one to the other, great big grins ensued.

"And one more. At JFP Southern Fried Karaoke, Hal & Mal's, up front with Todd and some ladies, singing "It's Gettin' Hot in Here," looking around for my little Mama, wondering, "Does she know I'm rapping about takin' off my clothes?" Couldn't find her, until I looked to the right of the other ladies and saw her at the end of the line, dancing in her signature fashion, hip-cocked and hands flitting from side to time in time with the music."

"The day I held the first issue in my hands has literally changed my life. I'm now in South Carolina working on a PhD studying Southern Women in pop culture. Thanks Donna! You'll never know how indebted I am to the JFP and especially you, for giving me permission."

"Standing-room-only at the JFP Chick Ball last summer! We did our first 'Men of Character," auction and Craig Noone 'sold' for over $1,000. Great night for a great cause."

"Jumping into a stranger's oyster boat at 4 a.m. in Bay St. Louis for a story about the BP oil spill, watching photographer Jaro Vacek puke for most of the seven-hour trip and racing to Gov. Haley Barbour's press conference in Gulfport where I arrived smelling like a fish market."

"After freelancing at the JFP for a couple months, I finally introduced myself to reporter R.L. Nave who I had seen in passing too many times to not feel embarrassed. When I told him my name, he responded with an unflinching gaze and said, "I know who you are." To say the least, I believed him."

"My favorite moment at the JFP was summer 2012 when I walked in for my interview and walked out with my first assignment. Sweet!"

"I loved brainstorming the name and ideas for the launch of the now GOOD issue! And, of course, going to Chicago in 2008 with a fellow JFP'er for Obama's election night."

"Putting together the Jackpedia issue. I have lived in Mississippi my entire life, yet I had no idea that there was that much to do in Jackson. What I miss about the JFP is the inspirational and challenging writer's workshop that I took about every Thursday over the summer."

"Participating in and attending the Chick Ball. I've never seen so many people come together for a such a great cause. And at the end of the night it was a pretty great party!"

" I remember when we applied to become a member of AAN (Association of Alternative Newsweeklies). We were too broke and overworked to make the conference trip. We waited anxiously that day and then, finally, a call from Colorado Springs Independent publisher John Weiss came in. In a somewhat heated discussion, the AAN board admitted us. Then, the icing on the cake was the following year when we racked up some serious awards as a first-year member. THAT put us on the national alt weekly stage. Proud moment."

"I fell in love with journalism the summer I interned at the JFP. My

interview with Freedom Rider Helen Singleton continues to inspire me."

"The Mad Men Summer Boom party. That was so much fun!"

"The magician at the ChickBall!"

"Covering the Hot Air Balloon Festival in Canton with three other interns during Summer 2010. I had my first hot air ballon ride, and we helped the crew deflate and pack up the balloon we rode in. To get the air out of the balloon we had to lie down and roll around on top of it, and it was just a fun day."

"Your article about Roy McMillan and the other guy (young black man very different from Roy Mc) working with him. That was the first story i remember that jumped out and said someone is a darn good reporter and writer!! Very in-depth and very fair to the subjects. I can't remember when that ran...it was fairly early in JFP history. Great coverage. I didn't mention the Frank Melton interview as I sure that one has been covered already. But if you do any ranking...that's #1. With a bullet...or a sledgehammer?

"On a community outreach note, the work you and other JFP staff did with Murrah's Hoofbeat newspaper before I was an employee there and during my time there has seen little recognition and it made a huge difference. Your work with young interns and your Youth Media Project has contributed to the futures of many bright young people in the Jackson area, as well.

"That story about the pro-life movement is the one that showed me that the JFP was certainly NOT a "liberal rag" but the newspaper to read for the whole story and the stories not being told by another local paper that shall not be named."

"JoAnne (Prichard Morris) in the Britney Spears shirt by far!" (JoAnne won the shirt in a Dirty Santa at a JFP staff holiday party and put it on.)

"The chick in the crown!" (She is referring to the chick then-intern Natalie Irby borrowed from a feed store to "model" for the 2004 Chick Issue cover. Photographer James Patterson photographed it at his gallery, and designer Jimbo Harwell Photoshopped a crown onto its little head.)"

"Monkey loved giving autographs at the Katrina art fundraiser." (Monkey is her son.)

"The Tyler Edmonds story. The pieces you did in the early days of the training school abuse scandal

"I went into labor there, remember!! Well, it was just me and Matt Saldaña in the office. He was totally freaking out. LOL."

"Birthday cakes from PRIMOS, and/or Campbell's!"

"The real faces of the Affordable Care Act. Of course, my girl was one of them, but I thought it was excellent and needed.

"My favorite is always the 'Best of Jackson'!"