A Brief History of 'The City's Smart Alternative' 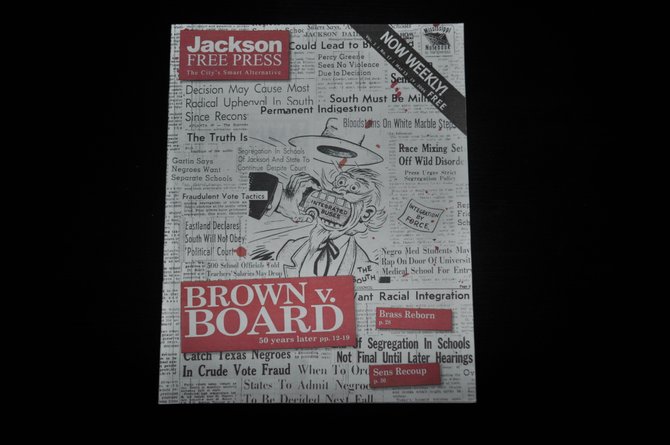 The Jackson Free Press started with no money but a big dream. Within weeks of Donna Ladd moving back to Mississippi in June 2001, and bringing Todd Stauffer with her, the two started talking about Jackson's need for a locally owned, diverse and hard-hitting newspaper that celebrated what was great about Jackson and probed what its problems, and solutions, are. And give a voice to the voiceless.

They were lucky enough to move into a Belhaven duplex being vacated by recent University of Southern Mississippi graduate Stephen Barnette (who was moving into a loft he had renovated downtown). The three became immediate friends, united in part by the vision that Jackson, and thus Mississippi, could become the kind of city and state that kept and attracted the best and the brightest, not the opposite, which seemed to be the predominant belief. We were concerned that Jackson had no local newspaper that was truly diverse in its coverage and its staff—or that appealed to anyone under 40—and believed the answer was a new alternative newsweekly.

Todd and Donna started taking the idea seriously after the terrorist attacks of Sept. 11, 2001, when they decided it was time to start working to improve one's little postage stamp of the world, as William Faulkner famously said. Their good friend, editor Amy Haimerl, was laid off by a New York magazine after 9/11 and came to Jackson for several months to help develop a business plan. It was Amy who came up with the name Jackson Free Press while reading a history of the black press in Mississippi and learning about the Mississippi Free Press, a boycotted and maligned Civil Rights Movement newspaper produced by a multiracial group of progressive thinkers including Medgar Evers, Hazel Brannon Smith and others in the 1960s on Farish Street.

After talking and planning for nearly a year, the then all-volunteer team expanded to include Jackson State University graphics professor Jimmy Mumford and sales rep Alisa Price, who came from the now-defunct Planet Weekly to sell advertising (she got paid commission). The team was lucky enough to have über-photographers Jaro Vacek and Charles Smith volunteer to help as well as Deborah Noel who did the event calendars and wrote about wellness. Artist Tony DiFatta designed the first cover and many more, as did Jimbo Harwell. Bingo Gunter, then a manager at Hal and Mal's, was the first assistant editor. JoAnne Prichard Morris joined as senior/consulting editor. Amy eventually landed back in New York where she developed multiple pieces about Jackson at CNN Money and Fortune Small Business.

The paper also acquired a sports guy named Doctor S—we'd have to kill you if we told you his real name—and a puffy, stump-tail office cat named Miss S (who was oddly enamored with Doctor S). Her S stood for "stump." His did not.

The JFP launched as a biweekly paper—"The City's Smart Alternative"—on Donna's late mother Katie Mae's birthday, Sept. 22, 2002, and the team initially worked out of a one-bedroom apartment on Fortification Street.

Early the next year, Donna and Todd moved the then-small staff into the other side of their duplex in Belhaven—which had two floors and two bedrooms (and where their cats Willie Hoyt and King Eddie came and went at will). Donna was delighted that the JFP was headquartered across the street from the home of the man who used to run the (white) Citizens Councils of America.

The JFP's next big milestone came in early summer 2004 when the paper decided to go weekly and to move into a real office—its current site in Fondren in a two-story building Doctor S fondly dubbed the "JFP tower." The first weekly JFP was published the week before the 50th anniversary of Brown v. Board of Education; our issue commemorating the event had a DiFatta-designed collage of racist clippings from The Clarion-Ledger, the Jackson Daily News and other media outlets from the 1960s slamming the decision.

The JFP has steadily grown through the years, even through the economic and newspaper downturns, and has a very diverse readership. Our staff has expanded to 22 (paid!) staffers with a variety of freelancers and a high-quality internship training program. We launched BOOM Jackson as an annual magazine in 2008 and took it quarterly in 2010.

A very proud moment came when we doubled our office space in January 2008, ending up with almost an entire floor and a classroom! We went daily at jfpdaily.com four years ago and just this summer launched the amazing 3.0 version of our website (thanks, Matt Heindl!) and became a member of the Associated Press so Mississippians do not have to pay for wire news online in response to daily newspapers launching pay walls. One of our favorite moments was when the staff at the Mississippi Legislature replaced the "Jackson Daily News" placard with one reading "Jackson Free Press."