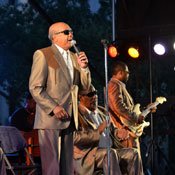 Courtesy the Blind Boys of Alabama

Jimmy Carter and the Blind Boys of Alabama have been making music together for more than 70 years.

Being in the presence of a living legend is a significant experience.

Jimmy Carter, leader and co-founder of the world-renowned gospel group the Blind Boys of Alabama, consumes your attention when he speaks. Carter's voice is a product of unmatched experience, wrapped in joyous simplicity and delivered with whirring wisdom––even when those words are relating the underrated importance of broth and the miracle of Splenda.

The Blind Boys have performed for three presidents, including President Barack Obama. They joined the Civil Rights Movement and performed at several rallies led by Dr. Martin Luther King. They have received five Grammy Awards for their recordings, as well as a Grammy for lifetime achievement. In 2007 they were inducted into the Gospel Music Hall of Fame.

Carter is beyond legendary, yet he is indisputably approachable. He wears his journeys in the form of an urbane air cultivated through experience. Carter will only take claim to the age of "over 50," but his memory, along with his voice, has held steadfast against the tide of old age.

As for who won the battle?

Blind since birth, Carter has never let the deprivation of sight deter him.

"My parents had six boys," he said. "All could see except me, the youngest of the six. I used to question God. I know why now. If I had been able to see, I wouldn't be doing this. This is my calling, and this is what he wanted me to do."

The Blind Boys of Alabama have stayed firmly rooted to the traditional gospel sound, attesting their authenticity as one of the many reasons for their longevity in the industry.

Dedicated to their tradition, yet itching to dip their toes in the often-dismissed waters of country music, the Blind Boys expertly executed a harmonious balance in their latest album, "Take the High Road," produced by Jamey. Johnson. Hank Williams Jr., Willie Nelson, The Oak Bridge Boys and Vince Gill are just a few well-respected musicians appearing on the album.

"We won five Grammys, so we're going to sing some from that," Carter said.

"I always say, when I go on stage, I say to my audience, 'ladies and gentlemen, I hope we can say something to lift you up,'" he said.

When the Blind Boys take the stage, they bring a sense of unity that intensifies with each step as they walk in crocodile formation, one hand on the shoulder of the man in front.

Carter, with his soothing old-southern tone, proudly announces the presence of the Blind Boys of Alabama. The stirring sound of their dusty voices come together flows flawlessly through the air and injects a feeling of joy directly into your bloodstream.

The music stretches across sub-genres and cynicism to coalesce a group of people fastened together with a love for music and zest for life.

"We know we have touched peoples' lives, and that makes us happy," Carter said.

"We like getting the message across. God is working through us, and we're going to let him go until he said, 'You can come on in now, good job'."

Even though the unsighted eyes behind the sunglasses have changed over the past 70 years, the Blind Boys of Alabama have yet to neglect their purpose not only as musicians, but also as God's children. They shake the latent soul awake and inspire the uninspired.

The Blind Boys of Alabama will raise the roof of Duling Hall Sunday, May 20, at 8 p.m. Doors open at 6:30. Tickets for the 18+ show are available for $44.50 at Babalu Tacos and Tapas, the Coliseum box office or online. An additional fee may apply if purchased online. For more information, call Arden Barnett at 601-292-7121.