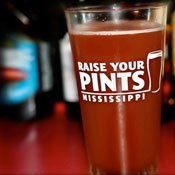 I'm a girl who doesn't venture far from Red Stripe (or Michelob Ultra on diet days). When I hear the word "gourmet," I rarely think beer. For some of us, gourmet beer has never graced our thirsty, amateur palates. But recently I had the opportunity to try a cask ale and then learn what the heck a cask ale is.

Last month Hal & Mal's hosted a cask-ale beer tasting, sponsored by Lazy Magnolia. Cask ale or "real ale" is the most natural a beer can get. It is unpasteurized, unfiltered and has no added carbonation. Artificial preservatives and carbonation are added to most store-bought beers for a longer shelf life. As soon as cask ale is brewed, it must be consumed which makes it difficult for a bar to sell because of the risk of wasted beer. It is called cask ale because it is brewed and served from a cask, which is a small barrel.

Lazy Magnolia's head brewer Gar Hatcher brewed the ale for tasting from the cask. Hatcher got the last beer from the cask, which he described with a sheepish smile, as "a total experiment."

"The base is Southern Gold, a honey beer," he explained. "We had blackberries we picked from a neighbor's yard and threw those in there."

The satisfaction on everyone's face after each sip of the caramel-colored ale was a surefire sign that Hatcher's experiment was a victory.

The beer-tasting was a fundraiser to support Raise Your Pints, a grass-roots organization working to lift the ban on gourmet beer in Mississippi. The state prohibits Approximately 85 percent of the world's top-ranked beers from being consumed or sold in Mississippi because of a ban on beers containing more than 5 percent alcohol. Mississippi is the only state in the country that has this ban.

"Natural," he said, describing the flavors. "Slightly tart. Blackberry notes. Low bitterness." One more sip and a brief pause. "Well-balanced. Once in a lifetime experience."

Toward the end of the night, Bailey stood next to the emptied cask to say thanks and explain the purpose behind RYP. All conversations stopped, and the glow from the string lights on the patio reflected in everyone's eyes. "We don't work for the beer industry," Bailey said. "Heck, I'm a forester. We are normal people who want choices that everyone else has."

Even after the National Prohibition repeal in 1933, some states continued to enforce prohibition laws. Mississippi, dry since 1907, was the last state to repeal Prohibition in 1966. There are still many dry counties and towns today where no liquor is sold.

For several years, it seems Mississippi has taken a hesitant approach to alcohol freedoms, and it has been a very gradual progression.

"Mississippi has been taking steps when it comes to alcohol laws," Bailey said. "This is just the last step, and we are eager for it to be taken. There just needs to be an increase in awareness and some public support as opposed to private support."

Along with Bailey, RYP members Todd and Katie Parkman have researched the economic benefits that come with lifting the ban. They point out that Mississippians are buying higher-alcohol beer in other states֖revenue Mississippi should be getting. Aside from the obvious revenue, the state could create more jobs and have more breweries like Lazy Magnolia.

"Mississippians should be spending their money in Mississippi," Bailey said. "That's all there is to it."

RYP members are not taking their mission lightly. Instead of ranting, they are doing extensive research and raising awareness. But a major component in this fight is not in their control֖it is up to the people of Mississippi. RYP needs support and can't do this without a large group of people, simply because the Legislature will not listen to a handful of people.

"Visiting other states is usually how people realize what we don't have," Katie Parkman said. Her face lit up as she talked about her new favorite beer she found in Portland.

"It was creme brulee-flavored. Amazing!"

For more information about cask ale tasting and Raise Your Pints, visit http://www.raiseyourpints.com.

Thanks JFP for the coverage. Raise Your Pints is a true grassroots organization fighting to bring just a little bit of consumer choice and culture to MS, and we could sure use your help. Please check us out at our website or on Facebook and consider joining up to support this cause.

Old Rasputin "Russian Imperial Stout" is an amazing beer. It saddens me every day waking up knowing Mississippi doesn't have it. Back to Tenn I reckon...

I don't know if it qualifies as a 'gourmet beer', but if you visit the states of Colorado or Texas (probably many more, these are the only two I know of that sells this beer), do yourself a favor and order a "Fat Tire"; I know, weird name, but a great beer, trust me.