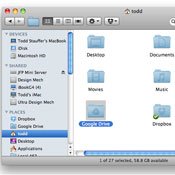 Some cloud-storage services can place special shared folders on your PC or Mac to store and collaborate all kinds of file types.

You're probably getting good and tired of hearing about "the cloud"—and no one could blame you. The problem is, it's not going away. While most folks still do a lot of their computing in local applications (Word, QuickBooks, PhotoShop), there's certainly a move toward more cloud-based services like email, basic software-as-a-service applications (like Google Docs, Mint.com or Salesforce.net) and the particular cloud service we're talking about this week—cloud storage.

Cloud storage represents a high-value entry point to cloud computing—the point where you (or your family or organization or company) decide that it's simply too convenient to be able to store your important files and documents on the Internet somewhere, where they're securely saved, backed up frequently and accessible from multiple devices whenever you happen to have an Internet connection.

Google upped the ante this month by introducing Google Drive (http://drive.google.com), a free service that offers 5GB of free storage (you can pay for more) that works in conjunction with the Google Docs service. Google Drive is, put simply, a small slice on Google's servers where you can put files. Once those files are there, you can share them with other people (either for collaborating or just so that they have access to the same files you do) and access them from any computer (or smartphone or tablet) where you have Internet access. If the files are Google Doc-compatible, you can even edit them online.

On your desktop computer, you can install Google Drive for Mac or Google Drive for PC; the result is a Google Drive folder on your computer that syncs with Google Drive in the "cloud" so that you have access to those folders from multiple devices and machines. Likewise, people with whom you share a folder also have synchronized access. If you had a folder called Marketing Materials on your Google Drive, for instance, you could share that folder with others in your business and you would all have access to the latest versions of those files for sending out to clients.

Of course, none of this is strange to people who've been using a service like DropBox (http://www.dropbox.com) for a while—in fact, at the JFP, we use DropBox in exactly this way to share files such as advertising kits and spec sheets that need to be updated in one central place and then accessed by a team of co-workers (https://www.cloudwards.net/how-to-share-files-on-dropbox/). Our advertisers and agencies share DropBox folders to us with their ad elements (logos, photos, documents), and we share DropBox folders among staff members for off-site page proofing or for freelancers to upload their photos and documents.

In one real sense, cloud storage is the winning answer to the problem of huge and redundant email attachments. By sharing links to folders (or individual files) stored on the Internet—instead of sending actual files as email attachments—you make it possible for contacts to access larger documents on the Web (or the most recent version) instead of forcing them to download files into their email programs.

Like Google Drive, DropBox offers PC and Mac tools for creating synced "folders" on your desktop computer, and it has the advantage of deep integration into a number of other apps, most notably those on smartphones, iPads and other tablets. Many third-party apps on iOS offer access to your DropBox for storage, in part because storage to and from the iPad or iPhone itself can be problematic and wonky.

An app I recently downloaded called FileBoard, for instance, integrates Gmail and DropBox accounts, so that you can write emails in Gmail and attach documents stored in a DropBox folder—convenient for when I want to reply to someone asking about advertising by sending them a PDF or two of information and rates. (Try it using the built-in Mail program on an iPhone or iPad and you'll see what I mean.)

Also in DropBox's favor—they have some fun. A free account starts out with 2 GB of storage, but gives you 500 MB more every time you refer someone to the service; up to 18 GB total. You can buy even more than that (50 GB for $9.99 a month; 100 GB for $19.99 a month) and DropBox for Business offers large pools of storage (in the terrabytes range) useful for workgroups and small businesses. DropBox also offers the occasional bell or whistle, such as a Photos folder whose link can be shared with others. When someone visits that folder in a browser, the images can be viewed online as a slideshow. Cool for sharing baby pictures or selling a house.

Want more options? Box (http://www.box.com) offers a simple name and a pitch to businesses that the service could replace file servers in the office; at the personal and small business level, it's particularly handy for collaborating on files—sharing them, tracking versions and even commenting on documents within Box. Shared folders in Box (as well as Google Drive) can have individual permissions (read-only versus read/write) and password protection, something missing from DropBox. Box offers apps that work not just on mobile devices, but with other applications like Microsoft Office and Google Docs so that you can save documents directly to your cloud storage.

SugarSync (http://www.sugarsync.com) is all about compatibility, with mobile applications for all sorts of mobile OSes—iOS, Android, Symbian, Windows Mobile, BlackBerry, even a Kindle Fire app—and offers a focus not just on storage and sharing, but syncing and backing up any folder on your PC or Mac. It offers many of the features of other services, including 5 GB of storage for free, but the focus here is syncing your files everywhere, as opposed to simply storing and accessing them online via a browser or special app.

Which should you choose? DropBox is probably the most popular at the moment, although Google Drive is likely to give it a run. Box seems best designed for corporate use—its free version makes you promise you're not using it in a commercial setting—and SugarSync is a bit more nerd-friendly, although I'd also recommend it if you don't have an online backup solution and want one. And, of course, even these aren't the only options—Microsoft offers SkyDrive now, which is particularly handy for people in the Hotmail ecosystem, while Apple, which recently killed its cloud-storage iDisk service, may expand its iCloud service for more general file storage; right now it's designed for syncing documents from Apple's own applications (Pages, Numbers) and syncing photos and music from iOS devices to PCs.

The cloud is here; we might as well get to using it!