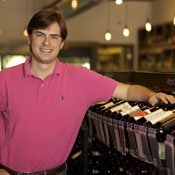 I never tried pinot noir until the movie "Sideways" intrigued me into buying a bottle. I haven't bought another merlot or cabernet since. Pinot noir is lighter bodied than a cabernet or a merlot. The color is more translucent in pinot noir than in other red wines. Pinot noir has always walked a little more softly across my palate. I detect an earthy tone in pinot noir that I never got from other reds.

Elliott Haller, 26, is a wine broker who has been in the industry since he was 21 years old. When we met at Fondren Cellars, where he works, it was clear this young man with the open smile and laid-back demeanor is embedded in the wine culture that first drew him in while he was an undergraduate in Toronto.

So what is the draw of the pinot noirs? "They tend to be less tannic (than the fuller-bodied red). ... I would say the most versatile red wine to pair with food is pinot," Haller says.

Haller says even some seafood dishes pair well with this wine. He says pinot is an ancient grape dating back as early as AD 100. Burgundy, France, produces the pinot noir that serves as the benchmark for all good pinots, although Haller says Oregon in particular is a good location for domestic pinot.

Pinot is a difficult grape to grow. "It has a thin, fragile skin," Haller says. The grape is susceptible to fungal infections, and it likes cooler climates.

"There's a level of inconsistency with pinot," he says. This inconsistency makes it a hit-or-miss proposition. For this reason, pinot, Haller says, is often called "the heartbreak grape." In spite of pinot noir's inherent difficulties, it has its fans. Haller summarizes the mark of a good pinot noir: "It has an endless complexity. ... 'Ephemeral' is a good word to describe the better pinot noirs."

Ready to try a pinot noir? Here are a few that won't blow up your wallet: