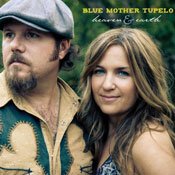 Ricky and Micol Davis, the duo behind Blue Mother Tupelo, perform at 11:15 a.m.

Due to heavy rains in the Jackson area tonight and tomorrow, the Stray At Home festival is relocating to an indoor facility. The new location for the festival is the Forestry Auditorium at the Mississippi Agriculture and Forestry Museum located just off Lakeland Drive in Jackson (1150 Lakeland Drive, Jackson, 601-432-4500).

You don't have to stray far from home to help build the city's creative economy and experience something new. A new arts and music festival is coming to Duling Green in Fondren to celebrate the beauty of Jackson and spotlight deserving artists and musicians from the city and beyond.

The idea was to bring something new to the city that will have an impact on the community and get a wide variety of people involved, Kristen Ley, an artist and one of the organizers, said.

"Creative commerce is huge, and I think it drives the community," Ley told the Jackson Free Press. "Bringing that into the community helps strengthen it and strengthen the relationships between people, which is also an aspect of building communities."

Stray at Home is a way to bring attention to talent that may not have been publicized through other avenues. The festival will feature both local and regional musical talent and showcase artists such as designer Kate Thomas and Greenwood native Lacy Barger.

Thomas is a surface designer who licenses patterns, prints and stationary of her work. Her artwork is showcased on Etsy, a website that specializes in handmade crafts. She will debut her work next month in House Beautiful magazine.

Owner of Little Things Studio, Thomas got involved in printmaking while majoring in graphic design at Mississippi State University. She began showing her work at the Cotton District Festival in Starkville and was able to sell several prints, so she began doing more shows. Thomas' prints earned her enough money to pay for her last two semesters of college out of pocket, she said.

Her work can be found exclusively at Whitley's Flowers in Jackson. She has also shown her work in New York, Austin and other cities.

Aside from being rich in art, the festival will feature a variety of musical acts with the Texas-based Telegraph Canyon headlining. The band's most recent album "The Tide and the Current," features the hit singles "Safe On the Outside," "Shake Your Fist" and "Quiet Assurance."

A number of Mississippi musicians, including The Delta Mountain Boys, Sound Wagon and Blue Mother Tupelo, will also perform.

It will be the first time many of the musical acts appear in a festival, Ley said.

What makes Stray at Home different from many festivals is its attention to giving back to nonprofit organizations both in Jackson and beyond.

"We feel it is important to partner with someone who is making a bigger difference than just having the festival," Ley said. Organizers hope that the festival will grow and benefit a different nonprofit organization each year.

A portion of the festival's proceeds this year will go to Parish Furniture, which was created by Mississippians. Parish Furniture is part of the larger nonprofit organization Peru Mission, which focuses on keeping the men of Peru employed through carpentry and other skills.

Not only do the organizers have hopes of broadening the talent and creative minds of Mississippians, they also hope to get festivalgoers to explore everything Fondren has to offer, Ley said.

The family-friendly Stray at Home festival is May 12 from 10 a.m. to 6 p.m. on Duling Green in Fondren. Admission is $5. Children 12 and under get in free. Primos Café will be on hand with food, and you can purchase beer from the Sneaky Beans truck. You can sign up for the cornhole tournament (throwing bean bags into a hole) at http://www.strayathome.com/cornhole.