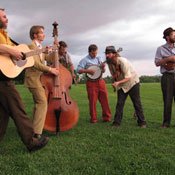 The Hackensaw Boys have toured throughout the United States and Europe. Ferd Moyse is second from right.

Mississippi native Ferd Moyse returns home April 18 to perform at Hal & Mal's as part of the band the Hackensaw Boys. The singer-songwriter band packs a new-age bluegrass sound, combining fiddles, cellos and other string instruments. The band's 2005 album, "Love What You Do," included the hit singles "All Good Dogs" and "Alabama Shamrock."

Moyse got his start with the group performing with the band in North Carolina. The Hackensaw Boys frequented many of the locations where Moyse bartended, and his old-time fiddle seemed to fit right in with the group's strings sound.

Joining the Hackensaw Boys meant leaving his bartending days behind, Moyse told the Jackson Free Press. "I figured out a long time ago if I was going to do this for a living like every other eight-hours-a-day job I've ever had, I should spend eight hours a day on it writing songs, playing and practicing," he said.

The Hackensaw Boys originated in 1999 in Charlottesville, Va., where four men, Robert St. Ours, Tom Peloso, David Sickmen and Rob Bullington, who performed individually on sidewalks and in shopping malls, had the idea of forming a band.

Of the four originators, guitarist Sickmen is the only one still with the band. The rest of the lineup is Moyse (fiddle), Ward Harrison (guitar), Ben Jacobs (bass) and Brian Gorby (drums/charismo). As far as vocals go, "Everybody sings a bit of lead, everybody sings a bit of harmony, and most members know when to shut up," according to the band's website.

The band tours all over the United States and Europe, playing music for anyone who will listen and averaging 150 to 200 shows each year. But for Moyse, playing at Hal & Mal's could not hold more significance.

Moyse, 35, learned to play the fiddle when he was a teenager, and his influences were some of the musical acts that performed at Hal & Mal's when he waited tables there for about two years before he left Jackson in 1999. He watched The Vernon Brothers perform almost every Wednesday night. "That's where I fell in love with the fiddle—watching Tim Avalon play," Moyse says.

Whether performing for listeners hearing their music for the first time or regular fans, Moyse says the Hackensaw Boys put their heart and soul into performing, and it shows in their high-energy sound.

"When I'm on stage playing the fiddle, I'm doing just that," he says. "I kind of lose myself and leave my troubles at the gate."