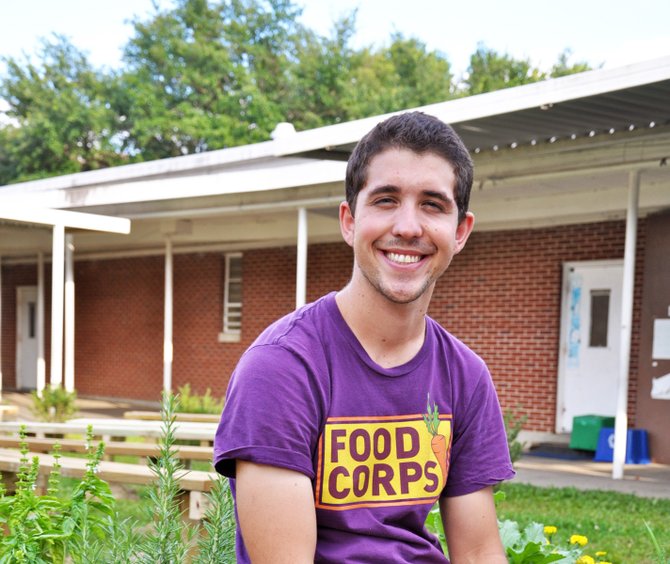 Graham Downey came to Jackson with a mission: to make healthy options for kids in Mississippi more accessible. "It's one thing to say, 'Eat healthy,'" Downey says. "It's another thing to provide kids with healthy options."

After graduating in May 2011 with a bachelor's degree in political science from Virginia Polytechnic Institute and State University, or Virginia Tech, Downey joined FoodCorps. The New York City-based non-profit assigns service members to work at sites in one of 10 states for one- to four-year stints. The members engage the community, and provide access to and knowledge about healthy food.

Downey, 22, asked to work with the Mississippi Roadmap to Health Equity in Jackson. He wanted to explore the cultural and social differences between our state and his hometown of Falls Church, Va.

More importantly, Downey wanted to get a closer look at the underlying problems of obesity in Mississippi. To help combat the problem, he works closely with students, faculty and staff at three Jackson elementary schools: G.N. Smith, Watkins and Green.

Downey spends one day a week at each school teaching staff and students about healthy eating. He helped them create gardens to grow produce such as onions, collards and cilantro. The students are responsible for maintaining the crops they plant.

Downey says he enjoys interacting with the kids and teaching them about even ordinary gardening tasks. He fondly recalls a recent day with the second graders at G.N. Smith. "I was just weeding with them, talking with them about their lives (and about) why we were doing what we were doing," he says. He told the kids: "You have to get the whole root. You can't just take the top off, even though it's easier."

Recently at G.N. Smith, Downey participated in the school-wide field day where the students played games, listened to music and ate lunch outside. Downey made salsa with foods from the school garden and served up with his home-cooked collard greens. He says the kids called the food "awesome."

Most early mornings, Downey goes to the schools to help student and parent volunteers tend the gardens. In return for their work, volunteers can take produce home.

He sees the gardens as places "where kids have real opportunity to make healthy choices," Downey says. By teaching the children how to plant and care for their own produce, they can have access to healthy food right in their back yards, he says, something that's especially important for people who may not have transportation to grocery stores.

Ultimately, though, Downey wants the kids to remember just one thing: "Eat more vegetables," he says.