Mystery and a Meal 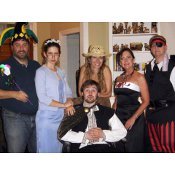 "Hear ye, hear ye! Royal subjects of the kingdom of Paramore, tonight we celebrate Prince Phillips impending beheading ... I mean uh ... betroth..." So begins the comedic murder mystery "The Bachelor Prince" as the audience sips their soup or eats their spaghetti.

"The Bachelor Prince," an original play written by Tom Lestrade and Alahna Stewart, is the latest offering by Mississippi Murder Mysteries, a local dinner-theater troupe with a focus on comedic murder mystery plays. The play is set in medieval times with a modern concept. A young prince named Phillip must, by his parents' decree, choose a princess to marry before he turns 21. Princesses come from different kingdoms to compete for Prince Phillip's heart and are eliminated from the competition during a rose ceremony. Sound familiar? But once they get down to the final three princesses, the King dies suddenly, and the final competitors are accused of murdering him.

At the end of the play, audience members can try to figure out "whodunit."

The idea for this play came from a trip to Disney World, where co-author Stewart's three granddaughters dressed as princesses. "I came up with the funny thought of princesses in jail," Lestrade says, "and we always like to incorporate some parody, so I was kind of following the TV show 'The Bachelor.'"

Stewart started Mississippi Murder Mysteries in 2005 and Lestrade, her business partner, is the managing director for the company. They don't have a set schedule, so show dates can extend two or three months at several different restaurants. All the plays revolve around the dinner-theater concept, which allows the audience to get involved and be a part of the play. Don't be surprised if you end up reading a line or two during the performance.

More Dinner Theater
If you want more chances to follow the clues and solve the case, this summer is full of mystery theater options in the Jackson area, including this lineup from the dinner-theater troupe The Detectives.