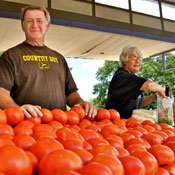 Mack and Brenda Berry prepare fresh produce for customers at Berry's Produce on State Street in the Fondren district.

The 1940s-and-'50s-style hand-painted boards that dress the outer walls of the new produce market, at 3139 N. State St., depict bright tomatoes and other fruits and vegetables. Located in a former gas station, the earmark of the art at Berry's Produce is the blown-up Wyatt Waters watercolor portrait of owner Doris Berry working in her stand at the old Farmer's Market in Jackson.

For years, Berry has been waking up at 4:30 every morning to travel to Jackson from Simpson County and sell produce at her stand with her sons Mack, Mike and John. The boys are all grown up now, and thanks to Doris, they are all educated, too.

"My mother sent all of her children to college (by) working her stand. (She) has helped all of her grandchildren make it to college, as well," Mack Berry said.

Without any doubt, the whole family loves the area, loves each other and loves, as well as knows, the produce they sell, Berry said.

Brenda Berry, wife of John Berry, works at the produce market and greets customers with a sweet, smiling face while bagging beans and putting peaches in crates. She said the family's love helped push them to move to Fondren.

"We moved to this new location because we feel that pretty soon, someone is going to buy the old farmers market," Brenda Berry said. "Working with fruit and vegetables and dealing with people has been in our lives for decades. Produce is our life."

The family is working on renovations to the building. When the internal renovations are finished, they plan to house everything from Amish dairy products to handmade artisan crafts.

"We do it because we love doing it," Mack Berry said, dripping with sweat and wiping the crushed strawberries and dirt from his pants leg when the JFP visited him June 19.

Berry's Produce sells fruit and vegetables from around the country—everything from plums and peaches to sweet potatoes and okra. The store is open Monday through Saturday, from 7:30 a.m. to 5:30 p.m.

Jackson County Rejects Brewery
A Jackson County couple had plans to build the state's second brewery until the county board of supervisors denied their application for a zoning exception Monday, June 18.

The local planning commission unanimously approved Paul and Wanda Blacksmith's plans in April to create Crooked Letter Brewing Company on their 15-acre property in an agricultural zone in Vancleave.

However, one neighbor, Lisa Younghouse, turned in a written appeal to the board of supervisors to block the approval.

When the Blacksmiths went to a public hearing June 18 before the board of supervisors, Paul Blacksmith said he expected a quick, easy, approval. Their plans seemed to crumble in front of them, though, as the board voted 4-1 against awarding them the special exception they need to build the business on their property.

"We went in (to the public hearing June 18) expecting for it to be a pretty simple process of, 'It was approved by the planning commission. Let's just move forward,'" Blacksmith said. "It wasn't. We were extremely shocked. We are very heartbroken."

The board was so ready to deny the exception, they forgot to allow the supporters a chance to state their case at the public hearing, Blacksmith said.
The board voted against the approval 5-0, but retracted their vote after Crooked Letter Brewing Company supporters said they deserved a turn to speak. After supporters spoke, the board voted again, with a 4-1 outcome.

The law requires the county to notify anyone who lives within 500 feet of the proposed site of any possible industrial building in an agricultural area. Blacksmith said Younghouse lives well over 600 feet from where they want to build the brewery.

The economic impact of the brewery could stretch far beyond jobs in the brewery. Blacksmith estimated the company would pay about $400,000 in taxes to the state in the first five years, and another $210,000 to the federal government. He said that doesn't include retail sales and employee wages.

Blacksmith said he will talk to his lawyer to figure out their next step. They could take their case to Circuit Court if they want to build Crooked Letter Brewery on their land, as planned. Otherwise, they will start looking for another location.