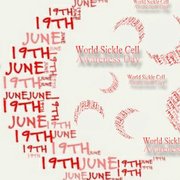 On June 19 at noon, the Mississippi Sickle Cell Foundation will join millions around the world to commemorate World Sickle Cell Awareness Day.

On June 19 at noon, the Mississippi Sickle Cell Foundation will join millions around the world to commemorate World Sickle Cell Awareness Day. MSCF will pray for patients with sickle cell disease and for families who have lost loved ones due to the illness. It encourages all Mississippians to join in an effort to bring awareness to the disease.

MSCF aims to educate Mississippians about the disease, encourage everyone to get tested for the trait and donate to sickle cell research. "In the past we've done vigils and balloon releases and that's great; but we really need people to be aware of the disease," MSCF Program Director Jefforey Stafford said. The MSCF reports there are currently at least 2,500 African Americans with the disease living in Mississippi.

In 2008, the United Nations deemed SCD a public health concern and declared June 19 as World Sickle Cell Day to bring awareness to the disease and its affects.

SCD is a hereditary disease of the red blood cells, which carry oxygen to all parts of the body. Here are a few facts about SCD:

·    People cannot catch it by being around someone who has it.
·    The only cure is through a stem-cell or bone-marrow transplant.
·    It can cause such problems as stroke, eye disease and severe infections.
·    The goal of treatment is to relieve pain and prevent further complications.

For more information on how to assist MSCF visit http://www.mssicklecellfoundation.com or contact them at 601-366-5874.