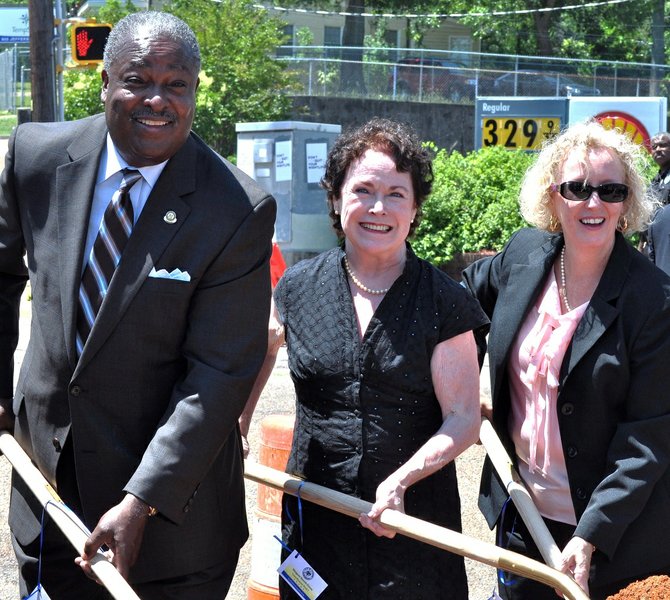 After 10 years of waiting, planning and discussing, a Fortification Street redesign project has finally begun.

"We are getting ready to mark a very momentous occasion here in the city of Jackson," Mayor Harvey Johnson Jr. said yesterday during a groundbreaking ceremony for the project.

The project is designed to make traffic flow slower and smoother once it is completed. The plans include converting the four-lane road between Jefferson Street and Greymont Avenue to three lanes, one of which will be a turn lane, and placing six new traffic lights and ornamental light fixtures along the new street.

Johnson said the redesign will benefit neighborhoods as well as people who drive on the street.   "The Fortification Street Improvement Project is going to enhance this entire corridor," Johnson said in a statement. "The four neighborhood associations--Belhaven, Belhaven Heights, Midtown and the Farish Street Historic District--will all benefit from this project."

With this redesign, the city hopes to create a "gateway to the neighborhoods" in that area. Workers will replace water and sewage mains on Fortification and replace sidewalks to make them compliant with Americans with Disabilities Act standards.

At the groundbreaking ceremony, Ward 7 Councilwoman Margaret Barrett-Simon said what must have been on many people's minds: "It's been a long time coming."

A representative from Hemphill Construction, which will restore the street, said work will begin next week and will take 18 months. Crews will begin at Greymont Avenue and work toward Farish Street, 1.2 miles away.

Traffic in the area will slow as the project is completed, so drivers should keep that in mind as they commute. Fortification Street will stay open; however, the street will be reduced to one lane on each side to make construction easier. Businesses in the work zone will have alternate driveways with signs identifying them to avoid confusion.

By the Numbers
According to the city, the entire Fortification Street improvement project will cost about $10.7 million:
• $8.9 million for a contract with Hemphill Construction.
• $1.8 million that the city has already spent for preliminary engineering and easement acquisition.

I wish they could've started yesterday. 18 months is a long time, but it will be worth it.

I am very proud of this project and the determination of the many people involved in this over a long period of time. Also, it's very important to support local businesses on Fortification during the repairs and improvements. Businesses like Pizza Shack, Katz, Basil's and McDades need you to keep shopping there during this time. Hooray!!!!