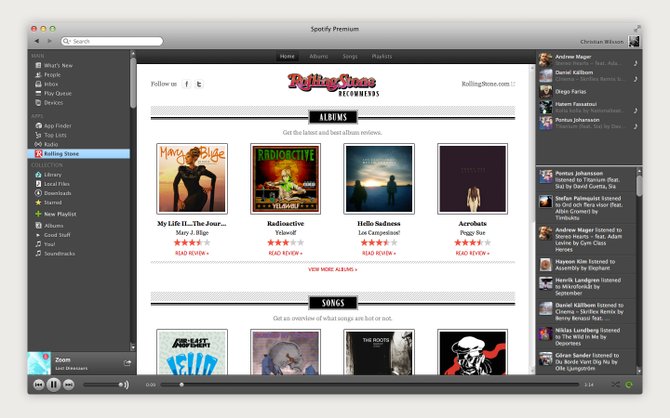 And that's just in my world.

Spotify (spotify.com) has caught fire in recent months partly because it's just getting to the States; the Swedish firm, which has already dominated Europe's online music market, celebrates its one-year anniversary in the U.S. this week, telling us that users have listened to 13 billion songs during the first year; worldwide, the service boasts about 10 million users, 3 million of whom pay for premium service.

The major differences between Spotify and Pandora (pandora.com), in case you're not already a fan ready to disrupt yourself, are twofold: Spotify is more about freedom to listen to specific songs, and Spotify is all about sharing. Where Pandora encourages a sort of genre-based music exploration (and, to be fair, I won't be getting rid of it any time soon), Spotify focuses a little more on letting you pull together your own library of music—free of charge, if you can put up with the ads—and sharing it with your friends.

Pandora lives in your browser (paying users can get a desktop app), while Spotify offers apps for Windows, Mac, iOS, Android and Blackberry with Windows Phone and Symbian support planned for U.S. customers. (Palm support is planned for European customers. Maybe WebOS is more popular over there?)

When you launch the desktop application for Spotify and create your account—which requires a Facebook log-in—you're shown an interface that's not unlike iTunes. Your "library" and playlists are on the left side, with the various listings of music and search results appearing in the middle. The library tools offer some unique options, like the ability to comb through the "Top" music charts for songs, or to just see what's new on the service.

You can also choose the "Radio" options, which give you streams of music similar to Pandora—e.g. "Maroon 5 Radio" gives your Maroon 5 songs plus other whiny, dance-y, pop-y songs that sound a like Maroon 5. (I'm just sayin'.)

On the right side of the interface is something new: a stream of what your friends are listening to on the bottom and, on the top, photos of the people that you're following or sharing with.

Where does Spotify get those friends? Remember that Facebook login that was required?

Spotify grabs people you know in Facebook and drops them in here, showing you what they're listening to using Spotify. Likewise, by default, what you're listening to in Spotify will show up on your Facebook page. (You may have seen more music sharing recently and wondered why.)

This, by the way, is another excellent reason not to listen to Maroon 5, at least not on Spotify. I'm kidding. (I'm not kidding.)

Actually, I'm kidding, but either way you can turn off sharing in Spotify if that's not appealing to you; head to the Preferences and turn off the option Show What I'm Listening to on Facebook.

Spotify also has a Private Session option (on a Mac you choose Spotify > Private Session to turn it on), which enables you to listen to all the Maroon 5 you want without anyone being able to see you. (Whew!)

You can share songs with your friends by dragging a song directly from the lists in the middle of the screen over to their icon on the Friend bar; you can also create entire playlists of songs and then share them to friends on Spotify or on Facebook (or via Twitter and Tumblr, or you can e-mail a link to your playlist).

For premium ($10 month) users, the other killer feature kicks in—you can pick and choose songs that you'd like to have available on your mobile phone (in playlists), sync them up and then you're good to go—you've got the MP3s in the Spotify app, meaning you don't have to stream at the gym or on the road if your plan doesn't allow it or to save on data costs.

Of course you can stream from your mobile, if you want, and the radio functions are available there, too.

Intrigued? Whether you're liking the social aspects of it or just encouraged by the idea of listening to a ton of songs you can choose, move around, and even sync to your mobile—Spotify might be your next app.