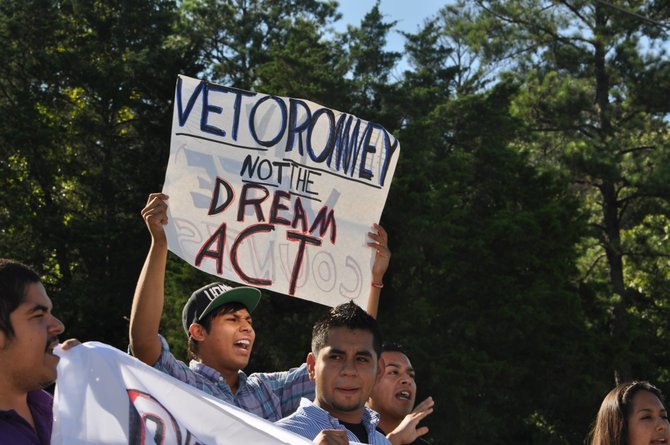 Protesters across the street from River Hills where Romney was holding a fundraiser. July 12, 2012. 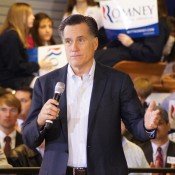 Mitt Romney visited Mississippi in spring 2012 and said the nation should be run like Mississippi.

JACKSON — Presumptive Republican presidential nominee Mitt Romney rolled through Jackson yesterday for a fundraiser at the River Hills Club. At $50,000 a couple, the event drew $1.7 million for Romney—making it the largest fundraiser in the state's history, ABC News reported.

Romney showed up in Mississippi in the middle of a national firestorm after Mother Jones magazine, the Boston Globe and others revealed documents that indicate that Romney may be lying about his past association with Bain Capital. Over the weekend, the Barack Obama campaign released a TV ad stating that Romney "is the problem" due to his financial deals, offshore bank accounts, and lack of disclosure over his taxes and tax shelters. This morning, the Obama camp released another TV ad criticizing Romney for not releasing tax returns as other presidential candidates have done.

In response to the characterization of his and his party's wealth, Romney told the River Hills audience that his party is not "the party of the rich," as opponents accuse.

“We also want to make sure people don’t have to become poor,” Romney said. “And we know what it takes to keep people from becoming poor," he added.

To emphasize his point, Romney used the wait staff at River Hills as a reference point. “I know that people in this room are probably doing relatively well, relative to folks across this country," he told the audience, as reported by Politico.com last night.

"But not everyone in America is doing so well right now, it’s tough being middle class in America right now. The waiters and waitresses that come in and out of this room and offer us refreshments, they’re not having a good year. The people of the middle class of America are really struggling. And they’re struggling I think in a way because they’re surprised because when they voted for Barack Obama…he promised them that things were going to get a heck a lot of better. He promised hope and change and they’re still waiting."

A former member of River Hills posted on the Jackson Free Press website today that dues there are about $300 a month, or $3,600 a year. Members must also buy stock at $2,500.

Outside the fundraiser, a small group of undocumented young people, Young Organized United (YOU), gathered to protest Romney's immigration stance. He has called Arizona's controversial anti-immigration law a "model" for other states, and he hopes that such laws will cause "self-deportation" of illegal immigrants. He has also taken a weak stance on the DREAM Act, a measure to help undocumented youth that is stalled in Congress due to a partisan split.

In June, President Obama issued a directive to hold deportations of youth brought to the United States illegally and to help make them eligible for work permits.

Aaron Bernadaz, 20, of Las Vegas, N.M., helped protest Romney from across the street. He is an "undocumented" student who wants to be a neurosurgeon. He told the Jackson Free Press that Romney is "against undocumented students, undocumented people."

Bernadaz wants to see better laws to help Latinos like himself who are willing to work hard to realize their goals. "We're not rats, we're people," he said. 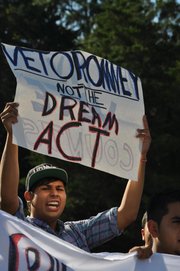 One of the protesters standing across the street from the Romney fundraiser at River Hills Country Club. July 16, 2012.

Jacqueline Hernandiz of Southhaven acted as a spokeswoman for the group. She said the group wants to see Republicans support the DREAM Act. "We're here to show Romney we are united together," she said.

The protesters chanted "Veto Romney, not the DREAM Act!" for most of the time they were there.

This morning, Mississippi Gov. Phil Bryant, who attended the fundraiser, tweeted out his support of Romney: "What a wonderful time in JXN yesterday evening with great leader & great American." Lt. Gov. Tate Reeves and U.S. Reps. Gregg Harper and Alan Nunnelee also were in the house.