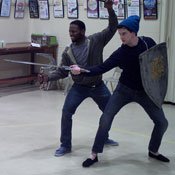 Quintin Lewis and Scott Gaines (left to right) rehearse a scene in "The Lion, The Witch and The Wardrobe."

Peter, Susan, Edmund and Lucy Pevensie accidentally leave their mundane lives for the wonder and adventure that an enchanted wardrobe grants. In C.S. Lewis' celebrated "The Lion, the Witch and the Wardrobe," set in the 1940s during World War II in England, the courageous children escape the atrocities of that period in British history, exchanging their anxieties for mythical Narnia and its magical creatures. While in Narnia, the Pevensies meet characters such as Tumnus, a selfless faun; Aslan, the great and powerful lion; and the evil and cunningly beautiful White Witch. The story is familiar to many who read the books or saw Andrew Adamson's 2005 cinematic production of the same name.

Joseph Robinette's stage adaptation of the classic story opens at New Stage Theatre Feb. 28. Chris Roebuck, director of education at New Stage, directs the play in an already successful season for the theater. It is a retelling of one his favorite childhood stories.

"I want them to feel like they're actually there ... to use the story with special effects," Roebuck says. He wants the audience to leave the theater feeling transported to the magic of Narnia.

In "The Lion, the Witch and the Wardrobe," look for Lewis' less-than-covert use of religious symbolism, a staple for the 20th-century writer. A particularly remarkable appearance of these Christian motifs is seen in Aslan, the great and powerful lion who allows himself to suffer humiliation and murder.

Aslan, although certainly capable of overcoming those who defame and brutalize him, gives himself up for the greater good of his cause. He wants to restore peace to his realm, Narnia. The implication is that Aslan represents Christ. Lewis' use of Christian symbols is evident throughout his prolific output and, while not understated, Lewis dealt with theology tactfully for the most part, exposing social injustices.

The New Stage production will not be cast with child actors but is geared toward child audiences. For more than nine years, New Stage has produced annual children's features as a goodwill offering to the community, Roebuck says. The bulk of the play's performances consists of eight matinees for grammar-school students with only three weekend performances open to the general public.

Roebuck says that each summer, New Stage conducts a two-week camp for child actors. At the end of camp, the young actors launch a four-performance run to show off what they learned.

The director likes the idea that local actors will delve into this classic piece of literature. Having the same actors portray multiple characters will not only help make the production a financial success for the company, it will add to the fanciful, dream-like nature inherent to the piece, he said. Costumed in gorgeous pieces pulled from New Stage stock, actors will reappear in differing dress to play different parts. This fantastic epic, like the 1939 film classic "The Wizard of Oz," will feel almost plausible.