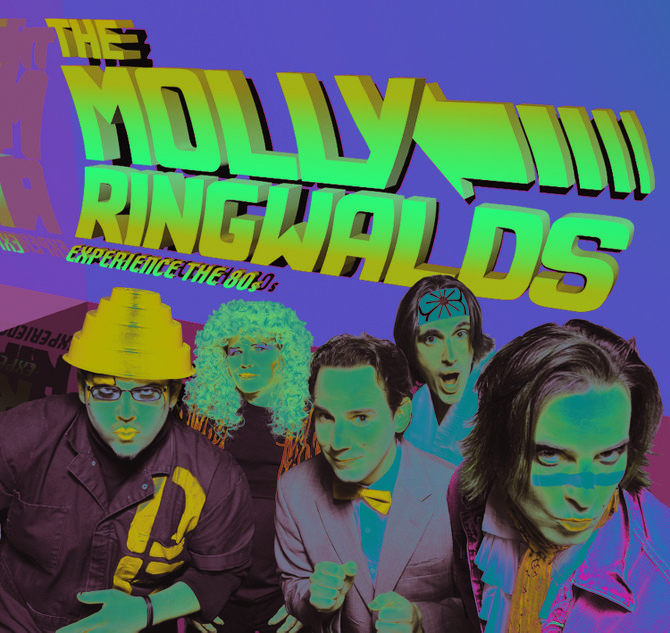 In the crowd are hard-rock and soft-rock lovers, love-ballad fans and futuristic Styx-loving aficionados. There are the fans who can loudly belt all the lyrics Journey ever put to music without even thinking about it. These are '80s lovers, and proud of it, ready to rock their heads and their hips.   While the crowd buzzes in anticipation, the five members of the Molly Ringwalds are busy backstage, primping their wigs and drawing on beauty marks in preparation for the night's show.

The Molly Ringwalds' British accents are authentic--they hail proudly from Sheffield, England--and so is the love and dedication they have put into the complete '80s package.

"In a performance, it is all there," Sir Devon Nooner says. Nooner is the self-proclaimed "synthesizer guy," guitarist and vocalist of the group. By "it," he means the spirit of the period. How could it not be with a Boy George look-a-like and other New Romantics swaying on stage in full make-up crooning their hearts and  souls out?

The quintet is now based in New Orleans, and performs under Owl Pride Records.

Each member embodies the decade in a different way, dressing as '80s icons with a campy twist: Nooner as Adam Ant, Wang as Dee Snyder (and sometimes Madonna), Thunders as the Karate Kid, English as Pee-wee Herman and Wilde as a Devo devotee.

The band plays more than 100 gigs a year, from bars and clubs to more family-friendly fetes, like the Ponchatoula Strawberry Festival and the Louisiana Shrimp and Petroleum Festival in Morgan City, La. In recent years, it was the featured act for Millsaps  College Homecoming.

The band credits its broad appeal to the passion, familiarity and energy associated with '80s music, which carries over to its performance.

"The music is great, but not only great--it is also timeless," Wilde says. If that last song from a high school dance comes on the radio, most folks find their head starting to bob and their mouth flying open with lyrics so many trust and know.

This is not the Ringwalds' first time in Jackson; the band has played at Hal & Mal's twice, and the musicians speak of Jackson as a pleasant wooded area with the strangest heat that seems to boil you in your  own juices.

Despite their eclectic and sometimes elaborate costumes, the Molly Ringwalds never keep the audience waiting long while they get fully dressed and made up. "It takes us about 45 minutes to get ready for show--don't worry, we have it down to a science," Nooner says.