Of Dogs and Tutus 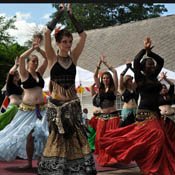 This year's annual Cotton District Arts Festival promises a great day of music, food and art­—including the unexpected—in a historic section of Starkville.

It's not everyday that you can munch on grilled ribs next to European-inspired statues surrounded by dogs in tutus to the strains of a bagpipe. But you can in Starkville in April.

One of the most unique places in the state—Starkville's Cotton District—transforms into Mississippi's capital for the arts for one day each year. On April 21, the Cotton District Arts Festival will fuse a wealth of music, food and arts for one of the premiere fine-art events in the state, featuring pottery demonstrations and a mix of music including bluegrass, rock, soul, oldies, rockabilly and more.

With the event's cross-section of the arts—culinary, music, visual and otherwise—organizers of the 26th annual Cotton District Arts Festival anticipate a crowd of 40,000 people. Attendance should receive a boost from Super Bulldog Weekend, the annual weekend combining Mississippi State University baseball and the spring scrimmage football game, which will include a half-time performance by the band Sugarland.

Maggie Bjorgum, co-chairwoman of the Cotton District Arts Festival, says the festival will entertain on many levels. "People can expect a lot of movement and a good time," Bjorgum says. "We'll have lots to do, see and eat."

With roughly 120 artisans showcasing their work, a dozen bands and 20 different food vendors, the daylong event promises to fill bellies and minds with food and art appreciation.

The Cotton District, Mississippi's first new urbanism neighborhood, has hosted the event since its developer, Dan Camp, and his wife, Gemma, helped organize the first celebration of fine arts in 1986. Grown from a few hundred people the first year, the event is now organized through the Starkville Area Arts Council.

Jay Reed, a local food columnist who organizes the Taste of Starkville food vendors, says people should show up ready to eat. To make sure he has a strong appetite, Reed plans to run in the event's 5K race first thing in the morning. He says he has a personal interest in making sure the festival provides interesting and delicious food—he wants to eat it.

"I'll make sure I'm really hungry when I get there," Reed says.

One reason the Starkville Area Arts Council has succeeded with the event through the years is because it identifies the best people to coordinate different events. Food connoisseurs work with the food, and artists organize the arts vendors.

In all, the festival will have a mix of arts including painting, jewelry, woodworking, furniture, frames, posters, photography, ceramics and other media. The council awards prizes in six art categories, along with the Best in Show honor.

And if festival attendees have questions about what they see, they'll get answers.

"Every booth will be manned by the artist," Burton said. "We want everybody to bring money and buy, but we also want them to have a good time visiting with the artists."

A first-time artist at the festival, Jeremy Klutts of West Point will have his electric and acoustic cigar-box guitars for sale. Used by musicians from Jimmy Hendrix to B.B. King, cigar-box guitars have been around since the mid-1860s.

"They actually sound pretty good," Klutts said. "I build all of them electric, so you can plug them up."

Attendees will have a chance to see art created, too. Starkville artists Dylan Karges and Robert Long will have pottery wheels at their booths to demonstrate their work.

For music, the festival will have two stages, each with range of genres selected by veteran musical-event producers Larry Wallace, a banjo virtuoso with his own band, and Cindy Melby, a music teacher whose daughters perform in the Nashville-based band Nash Street.

Headlining the festival is Grenada native Charlie Worsham, a much-sought-after Nashville musician who has toured with both Miranda Lambert and Taylor Swift. Worsham, who first performed at the Grand Ole Opry at age 12 after winning a national banjo competition, has written songs for Dierks Bentley and performed on Eric Church's most recent album.

"Charlie is one of today's best talents—not just in country music but across the board," says Wallace, who taught banjo lessons to Worsham.

Speaking by phone recently before a concert in Austin, Texas, Worsham said he always enjoys playing in his home state, especially in a festival setting.

"I jumped at the chance to play in Starkville," Worsham said. "Festivals are a little more of a fun, loose atmosphere."

Updated April 19 to correct a typo.