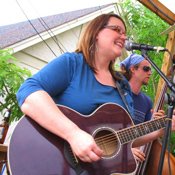 Anna Kline wrote and recorded a song about the flood earlier this month.

Within the past two weeks, Anna Kline saw the devastation of the Mississippi River flooding, wrote a song about it and played it during practice with her band. In the next few days, Anna Kline and the Grits & Soul Band sang the song on WLBT-TV, then recorded and produced the song, "Flood Waters."

A native of Hernando, Kline grew up singing with her family members and learning to harmonize as she got older. She attended the Southern Baptist Educational Center, where she graduated in 1994. During those obligatory high school years, she began to sing more on her own for different civic groups, and eventually developed a passion for Celtic music. This deep interest for folk music is what fueled her drive to pursue more musical endeavors.

After high school, she enrolled at the University of Memphis where she studied music business and mass media. Defined by her love for music, the 35-year-old decided to revert to the arts, particularly music, as her focus.

She moved to Jackson in September 2004 and first lived in Belhaven. She eventually moved to Fondren, where she found herself surrounded by people who shared her same interests in art and culture.

This Jackson resident's love for culture and the arts defines her career as well.. Kline works as a special projects officer for the Mississippi Development Authority's Bureau of Film and Cultural Heritage. A filmmaker as well, Kline worked as the coordinator for the Crossroads Film Festival in 2008 where she showed a series of short films. She also dabbles in freelance writing.

Continuing her musical semi-profession, Kline joined forces with a few musically talented individuals in September, and they eventually formed the band Anna Kline and the Grits & Soul Band. Their sound is primarily roots-based with folk, bluegrass and indie-rock influences. The new song "Flood Waters" has that close-to-home sound.

For information on Anna Kline and the Grits & Soul Band, visit http://www.gritsandsoul.com or email Kline at [e-mail missing]. Find out where the band is playing next at http://www.myspace.com/gritsandsoul.