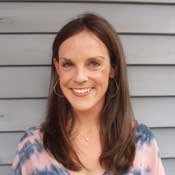 Whitney Maxwell is the pastry chef at Parlor Market in downtown Jackson.

Whitney Maxwell has had a passion for cooking since she was a tot in her mother's kitchen. A native of Jackson, the 27-year-old graduated from Ole Miss in 2007 and attended culinary school in California. Maxwell lives the life of a newlywed in northeast Jackson with her husband, Graves Maxwell. When she is not creating sweet culinary masterpieces, she runs, writes thank-you cards and plays tennis.

She joined the team at Parlor Market (115 W. Capitol St., 601-360-0090) and has been pastry chef there since its doors opened last September. She continues to develop delicious new recipes.

What did you study at Ole Miss?
Hospitality management. I knew I wanted to do some kind of event type of work or cooking. Growing up, I was always in the kitchen and helping. My first job was at Brent's (Drugs in Fondren), and then I worked at Everyday Gourmet. While I was in college, I worked at a place called Emily's Table in Taylor, Miss.

What made you decide to come back to Jackson to work?
I went to pastry school in California at the CIA, which is the Culinary Institute of America. It is in St. Helena, Calif., and I did the baking and pastry program there right after I graduated from Ole Miss. I did that for eight months, and I knew absolutely no one. I did not have that core family connection that I had grown up with in the south. So that is one reason I moved back. Also, the connections. I was one out of 500 at the CIA looking for a job in a kitchen. Whereas here, I knew people and had connections. It just made sense.

What is your favorite part of being in Jackson?
Well, it is my least favorite thing and my most favorite thing, being from here. You know, I love seeing people that I know everywhere I go. But at the same time, you want to be invisible and not run into some one (you know) everywhere you go.

It's a love-hate relationship. But, it is more love than hate.

What do you enjoy most about being a pastry chef?
Probably trying to create new takes on old recipes. It is fun to see what different flavors you can play around with and see how it turns out.

Where do you get your inspiration and your ideas from for your pastry menu at Parlor Market?
I, personally, try to think of things that remind me of growing up and make them into a dessert.

We had an Arnold Palmer dessert two weeks ago, which was sweat-tea ice cream and a lemon bar with mint tea leaves. I won't drink sweet tea, I always drink Arnold Palmer half-tea, half-lemonade. That is what my mom always made when I was growing up.

What is your favorite dessert?
The Strawberry Mason Jar Cake. I came up with the recipe and started making it when I was at Chimneyville (Barbecue Smokehouse) in Flowood from 2009 to 2010. It sort of evolved from there.
What are some tips or suggestions that you can give on how to make desserts healthier?

I would say focus on the natural sweetness of fruits. Use honey and maple syrup rather than sugar. It is more natural and
less processed.

If I were to make a healthier version of a cake, I could use wheat flour and a healthier kind of oil.

Preheat the oven to 400 degrees.

In a medium saucepan, combine berries with honey, vanilla, lemon and lemon zest, and bring to a simmer.

Stir in the slurry (the cornstarch and water mixture act as a thickener) and cook, stirring continually, until thickened, about one minute.

In a standing mixer, beat egg whites with wire whisk until they hold soft peaks.

Gradually beat in the superfine sugar in a stream and continue beating until glossy, stiff peaks form.

Fold in 3/4 cup of the berry mixture, leaving streaks in whites.

Bake for six minutes or until golden on top.