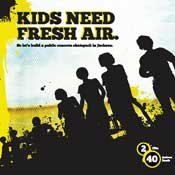 SkateMS plans free events this summer where different artists on the CD perform.

One day, Jackson's (gently) aging skaters, scarred-knee veterans of a thousand plywood ramps and endless miles of dented handrails, came to a realization. Society now recognizes skateboarding as a sport, just like basketball or baseball. But while Jackson has its courts and soccer pitches and even competitive swimming pools, it doesn't have a free skate park for kids. And so, SkateMS was born.

Billy Valentine was a military journalist for nearly 20 years, covering events from the massive BP oil disaster in the Gulf to the battlefields of Afghanistan. He also grew up skateboarding in Jackson.

"Skateboarding is how I found out about music," Valentine says.

The soundtrack for skaters back then was mostly punk and hardcore. Valentine gravitated toward guitars over ollies and fakies, and through the years spent a lifetime in bands of his own, most notably the Comas.

Valentine was talking to SkateMS honcho Frank Henn one day about what he could do to help out with fundraising; folks were donating to make a skate park a reality--from T-shirts to cupcakes.

"I was like, maybe I can get six of my friends' bands to record two songs. I'll record them, I'll burn them on my computer, and we can sell it at Sneaky Beans. Maybe we can make $80 so we can buy more T-shirts," he says with a laugh, but the idea resonated with a lot of musicians.

"We started asking around, and it started building momentum. These people we never heard of starting submitting tracks, and they were really f*cking good. We had hip-hop and folk and indie rock, all out of the blue."

Within weeks, the benefit record swelled to include 40 Jackson artists. You'll find rap from Skipp Coon and Da A$tronautZ, and punk rock from the Overnight Lows and the Hypnotic Chickens. A Bullet Well Spent adds metal, Frank & the Meltones provide garage rock, The Delicate Cycle is indie rock, and Adam Bloodbird Harrington has country. The youngest artist is 15, and the oldest is 56.

"It's a snapshot of what's going on right now," Valentine says. "Equal parts male, female, black, white. Diversity is a theme--it wasn't planned, but it happened."

To emphasize equality songs are in alphabetical order by band. Valentine says one of his goals is to get different musical scenes mixing together--to get rap kids going to punk-rock shows, punk-rock kids at hip-hop clubs.

SkateMS plans a series of free events all summer where artists from the compilation will perform. The first is Saturday, May 28, at Sneaky Beans in Fondren, with 5th Child, Taylor Hildebrand, Adam Bloodbird Harrington, Kladni Figures, Spacewolf, Liver Mousse and Overnight Lows performing. The SkateMS compilation album is $15 for a two-CD set.