The Candy Heart: A History 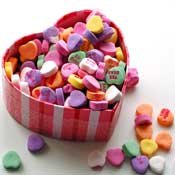 "Be Mine," "Kiss Me," "Sweet Pea," ... "Tweet Me." Sweethearts Conversation Hearts have been one of the most popular American ways to say "I Love You," on Valentine's Day since Abe Lincoln was in office. Brainchild of Daniel Chase—brother of NECCO (New England Confectionery Company) founder, Oliver Chase—the offbeat, yet ever-charming (and oddly chalky) candies stamped with heartfelt sayings have become almost synonymous with Feb. 14.

But don't expect to pick up a box of the same NECCO hearts you've become accustomed to gobbling since you were a kindergartner dropping Looney Tunes Valentines into your classmate's red and pink-bedecked shoeboxes. The all new Conversation Heart has received a makeover—and not just with updated pop-culture sayings like, "Text Me," "So Fine" and "Chill Out." The most recent version of the famous confection has a new set of colors, flavors and even a softer texture.

I'm admittedly heartbroken at the thought of losing old quirky favorites like wintergreen and banana, and don't so much love the thought of a chewy blue version of what used to be pleasantly crunchy pastel hearts lightly dusted with powder. Part of the appeal of the candy has always been its endearingly old-fashioned flair.

But learn to accept strawberry, grape, green apple, lemon, orange and blue raspberry into our 2011 Sweetheart repertoire we must. Because the oldest multi-line candy company in the United States produces 100,000 pounds of Conversation Hearts a day from late February through mid-January each year. And someone, maybe even your "soul mate," is going to have to buy them, because historically, the entire annual production sells out in a mere six weeks.