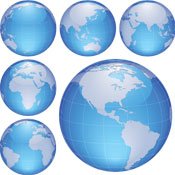 Like most American children, the formal holiday dinners of my youth were cause for much dismay. "Get your elbows off the table!" my aunties would snap sharply at the boys. "Don't talk with your mouth full, and for God's sake, child, don't play with your food!" The commands continued like this throughout every holiday meal, every year of my childhood. If you, too, grew up in America, such mealtime landscapes are probably as familiar as someone asking, "Could you please pass the salt and pepper?"

Every culture has social norms that steer behavioral expectations, and are often guided by religious beliefs and deeply ingrained values. Not surprisingly, they usually make appearances at the table, where customs are acted out in accordance via meal-taking rituals.

To the western outsider, some of these practices might seem too casual, even though they're guided by specific religious beliefs, while other traditions will feel oppressively formal in contrast.

Either way, the guest of the global table shouldn't make assumptions nor draw absolutes. There happen to be several manners that appear culturally widespread (not chewing with one's mouth open, or playing with utensils, for example), but even those aren't universally considered a faux pas.

Take a cue from the most savvy world travelers: Read as much as you can about a culture's mealtime mores before arriving as a guest; don't make assumptions; and let your host(s) be your guide.

China
• The eldest person present, or the guest of honor, is given a seat facing the door.
• Pick food placed at the top of a dish and nearest to you in distance. Never rummage through a dish for your favorite food.
• When the hostess says her food isn't good, the guest must disagree and tell her it's one of the finest foods he or she has ever tasted.
• Never point chopsticks at another person, it's insulting.
• Never suck on chopsticks, or use
them to move bowls and plates.
• Talking with a full mouth, slurping soup and belching are common practice.
• Tasting food from another guest's plate, and eating with your elbows on the table are also acceptable.

Japan
• In traditional restaurants, expect to sit "seiza" (kneeling on the floor, with legs folded underneath the thighs, buttocks rested on the heels). On less formal occasions, "tailors style" (Indian style) sitting is common.
• Wait for the host or hostess to tell you to eat three times before eating.
• One should always clean ones hands (but not face) before dining with the steamed towel provided.
• Never stick chopsticks vertically into a bowl of food. This is the traditional presentation form for an offering to one's ancestors.
• If liquid or bits of food drip onto the table while you're attempting to transfer them, use the bowl of rice in your other hand to catch the liquid. However, it's important not allow the liquid to remain on the rice. The discolored portion of the rice should be eaten quickly. Rice (in a bowl) should remain white if it was served that way.

Philippines
• A fork and spoon are the typical eating utensils. The fork is held in the left hand, and is used to guide food, especially rice, to the spoon held in the right hand. If no knife is available, use the fork to slice foods, although some frown upon this.
• When you have completed your meal, always place your fork and spoon together with the tines of the fork and spoon facing up on your plate.

Malaysia
• Always use the right hand for eating.
• For functions that require guests to sit down on the floor, men should sit crossed-legged and not stretch their legs.
• Pointing your feet at others is impolite.

AFRICA
• In many African countries, eating is done without cutlery, with the right hand, from communal dishes.
• Muslims often say grace (bismillah) before dining.

Tanzania
• It's rude to show up early to dinner. Arrive 15–30 minutes later than expected.
• It's considered pretentious to use forks or knives to eat Chapati or Ugali.
• If eating on a mat or carpet, do not expose the sole of your foot.
• It's impolite to drink beer straight from the bottle.
• In some regions like Zanzibar, dinner tables are gender-segregated.

Afghanistan
• Guests are always seated farthest from the door; when there are no guests, the grandparents are seated farthest away from the door.
• Guests should refrain from eating too much, unless the host coaxes you to eat more, which he/she almost always will. The host should always ask at least three times if the guest wants more food, and the guest should refuse at least three times.
• Wasting food is frowned upon.
• Soup may be eaten by soaking bread in it.
• If bread is dropped on the floor while eating at a table, it should be picked up, kissed and put to one's forehead before disposing of it.

Pakistan
• Wash hands thoroughly before sitting and compliment the host.
• Don't look into others' saucers while
eating.
• Do not chew loud enough for others to hear.

INDIA
• Indians generally expect food to be eaten with the right hand, though it's acceptable to use the left hand to pass dishes.
• In South India, it's acceptable to use the hand up to the second segment of the fingers, and the first segment of the thumb to pick up food. The four fingers are only used to pick up and spoon food. The thumb is used to push food into the mouth. It's considered rude if all five digits are used to place food into the mouth.
• It isn't necessary to taste every dish, but you are expected to finish everything on your plate.
• South Indian meals are served on a banana leaf. Vegetables are placed on the top half of the leaf, and rice, sweets and snacks on the other half.

Chile
• Never use your hands to take food, unless eating foods customarily eaten this way: bread, asparagus spears, etc.
• You must not put your elbows on the table.
• It is not advisable to seek a second course, unless it is offered

Peru
• Leftover Ceviche lemon juice can be poured into a glass following consumption of the fish pieces. This accepted practice is called the "drinking of the tiger's milk"
• Don't stretch after a meal.

Russia
• It is improper to look into another's plate or saucer.
• Small food should not be cut.

Great Britain
• The fork is held in your left hand and the knife is held in your right when used at the same time.
• You should hold your knife with the handle in your palm and your fork in the other hand with the tines (prongs) pointing downwards.
• Food should be brought to your mouth on the back of the fork.
• Salt and pepper shakers should be passed together.

Thanks so much Brandi for this column. I didn't learn any manners until I lost a couple of girlfriends and dogs for eating my greens and peas with my hands. I learned as a little boy that my peas, greens and cornbread tasted better when I mashed them together with my hands. I didn't know you were suppose to do that just at home or when no one was looking, so I did it in a couple of good restaurants while I had my main squeeze for the moment at my side, and the women got mad, left me, and took my dogs too. And I still miss my dogs. I've been missing the women too but I'm hoping my aim will soon get better since I'm now wearing glasses.