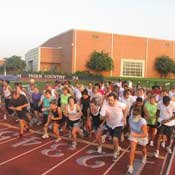 In the final week of the Paul Lacoste Fit 4 Teaching Challenge, teachers take off for a track workout at Jackson State University.

After waking up before sunrise, nearly 200 teachers--and others who work in schools--arrive at Jackson State University at 5 a.m. or 6 a.m. It's the 2011 Paul Lacoste Fit 4 Teaching Challenge that began May 30, sponsored by the Blue Cross & Blue Shield of Mississippi Foundation.

During the 10-week challenge, the teachers' daily hour-long workout began with a warm-up and stretches. Participants then went on to cardiovascular workouts, training for speed, agility and strength, and workouts on the track. Everyone then came back together for motivation and more stretches, and the hour ended with the team breakdown count: "1, 2, 3, NEXT LEVEL!"

"If you think you're going to some little camp that won't be tough or anything, that's not true," says Deedra Watts, a first-grade teacher from Clinton.

The participants came from Canton, Clinton, Hinds County, Jackson, Madison, Pearl and Rankin County schools, in addition to the Mississippi Association of Independent Schools and Mississippi Head Start. At the end of the eighth week of the program, participants lost more than 2,500 combined pounds thanks to Lacoste and his trainers who want to do away with obesity.

"We can conquer it, and we do it through teamwork," Lacoste says.

Michelle Scott, who teaches second grade at Gary Road Elementary School, says working out leaves her energized. "Being on your feet all day is tiring, and now I don't think it's going to bother me as bad," she says.

The program will help the participants be good examples for students.

"Everyone has a teacher that they love, and teachers have such an influence on our children's lives," says Ashley Strange of the Cirlot Agency who does public relations for the Fit 4 Teaching program. She participated in the 2010 Paul Lacoste Fit 4 Change program for state legislators that received national attention after lawmakers lost 1,401 pounds. At the end of this year's program, legislators had lost over 3,000 pounds.

Both Watts and Scott say that student diets aren't as healthy as they could be although their schools offer healthy options.

"The children are not going to choose the healthy choices all the time," Watts says, adding that students who choose salads and other healthy food over less nutritious options are "few and far between." Watts also says her students are not physically active. Their after-school activities mostly consist of homework, television and video games.

Scott agreed. She says more parents have to provide "what's best for (their children)." She saw the unhealthy food some parents packed for their kids--big bags of chips and packaged cakes for snacks.

"The kids would rather bring a bag of Cheetos than a bag of carrots," Scott says.

Watts and Scott say they will continue their healthy habits after the program ends. "I'll be joining the (Baptist) Healthplex to go with my coworkers," Watts says. Scott has been researching gym memberships, and she and her fiance are now running and walking. "It's kind of become a part of me," she says.