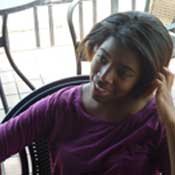 "I guess we'll have to catch the bus to school tomorrow," I thought when I spotted a dim red spot in the water that was our family Chrysler Concorde. From inside the townhouse, I watched the fierce hurricane winds blow water from both the sky and Lake Pontchartrain toward my city.

Between emptying buckets of water out the window and cleaning up as chunks of ceiling fell, I decided that it would be best to finish that literature assignment that I had been putting off that was actually due a week prior to Aug. 25, 2005. At that time, I didn't come close to realizing the severity of the situation. I can remember telling my friends at school that I would see them next week. Saturday, the next day, I waved back to Andre, my lifelong neighbor and best friend, not even thinking that I should say some sort of goodbye. At the time, I didn't expect it to be the last time I'd see him.

It wasn't until I was out in a boat traveling through New Orleans that I realized this water covered everything, and it wasn't going anywhere. We were transported to a highway on the edge of town where the water had dried up. There were people as far as I could see; all were stuck in the city because they hadn't evacuated, either. All of us were hungry and dirty and were being called refugees as the officials tried to figure out what to do with us.

After a two-week-long trek out of the city, my family eventually ended up in Jackson. My grandmother thought this to be the best place to go because we would be close to family here. The transition to Jackson has been tough but steady. There was a complete culture shock.

My first school experience in Jackson was at Chastain Middle School. I hated it; nothing was the same as back home. The students there seemed like a totally different species. I could barely understand anything they said, and they were amazed at my so-called "accent." They seemed to be living in a different universe with different popular music, television shows and styles. They were continually complaining about the uniform policy, which I barely considered to be one.

I learned some hard lessons the year of Hurricane Katrina, lessons I had to learn fast. I was forced to grow up and be a bit more responsible and alert. My family struggled, and my job became making good grades to ensure a better future. Somehow, I was supposed to not look back at everything that I once had and lost and the life that I could not have back.

Ultimately, Katrina somewhat helped me. That two-hour event forever altered my life. Although Jackson is only three hours away from New Orleans, I feel as if I never would have had the same opportunities and I probably never would have become involved with any civil-rights activities. There's a chance that I never would have explored writing journalistically and that I would have just stayed in the safety of my house and backyard like I did for years.

Briana Robinson is a recent graduate of St. Andrews Episcopal School who just started her freshman year at Millsaps College. She is a Jackson Free Press intern and member of the JFP's Youth Media Project.