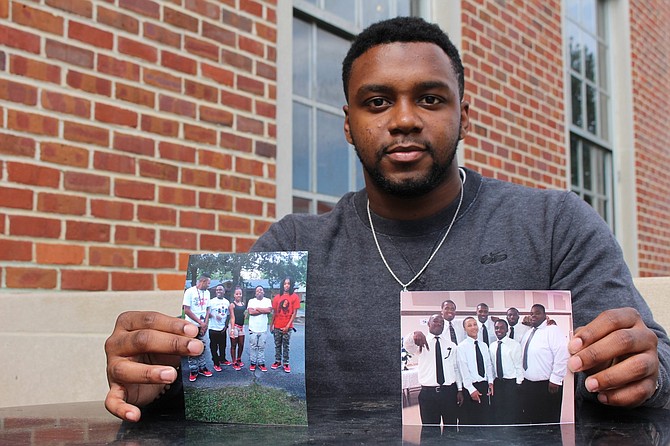 Ten years after Hurricane Katrina, graduate student Ashley Norwood asked Gulf Coast natives at the University of Mississippi, "What's the first thing that comes to mind when you hear Hurricane Katrina?" They each discussed their most vivid memories — of cats, birthday parties and Vienna sausages. Click the images below to hear their stories.

My mom works in the school. Our school was out for awhile and after the first few weeks, she knew we weren't gonna be in school in Gulfport. So one of my uncles had a co-worker who donated an 18-wheeler full of water and supplies. We couldn't get any flights. Gas was so high. A flight was like $500 - $600 one way trip.

My house was damaged, but her biggest concern was that we had no clue how long we would be out of school because of the storm, which wiped out all the schools. So she packed my bag and me and my friend, an exchange student from Cozumel, met the guys off the highway in my uncle's truck. So I rode an 18-wheeler, like a 26-hour ride, to Kansas City.

It was me, my uncle and my friend. We had to take turns sitting in the passenger seat and the drivers shared a bunk bed. Man, I thought I'd never get there. I didn't have any games to play, any books to read. Just a window and a bunch of highway

Oh my gosh. Vienna sausages! We ate Vienna sausages for I know a month or two after the storm. We didn't have electricity. My dad would try to make grits or oatmeal over a match. We took showers with gallons of water, and we had so much water because of the generous donations from the Salvation Army. They even gave away all-white Air Force Ones. It was hot, so hot. I had a nose bleed almost everyday. My dad's job was completely destroyed, so he was out of work for awhile, but he was a "hustla." He had an eye for parts like aluminum, metal, parts of an air conditioner, and he would sell it. For big bucks! They called it "scrapping." I called it survival.

But we were so fortunate. Part of our house was destroyed, and we lived in the garage for awhile. When we found out it would take at least six months before the rebuilding began, my family decided to get away to Disney World for three weeks. We returned to a remodeled house after six months and never left. Home is home. There's no place like home.

A day before the storm came, we had this stray cat that'd come around. We would feed it. One day we were in the living room, and the screen door was open, and the cat brought all these babies, and we thought they were rats. She starts bringing them up to the door, and we couldn't let the kittens be outside without care. We bought houses for them all.

But then the storm came. We had 30 family members, and these little tiny kittens were everywhere! Four little kittens. We tried to keep them all in the laundry room in a little box because they kept getting stepped on. During the rumbling of Katrina, they got stuck in between the water heater. They were so scared and shaky. But I think they were most comfortable there. My mom still calls them Katrina cats 'til this day.

For the kids, the cats were a distraction and kept them calm during the storm. We kept two and gave the others away. I remember getting up to check on them days after the storm. 'Til this day, they still get frightened when the rain comes, and it thunders.

We did whatever we could for each other for the first couple weeks after the storm, but it took awhile before it got back to "regular life."

My family stayed in our house during the hurricane. It was me, my mom, my dad, three older cousins and my little cousin, who was 5. As the flood waters rose, we had to swim out the back window. Our house had up to six feet of water. But it's crazy; we were extremely calm. We swam until we got to the highway. Our whole neighborhood flooded. Off Highway 613, it was, like, more than 100 people in a small abandoned gas station. The family across the street from the gas station managed to save one of their cars, and they gave us a ride about five miles north to my Grandma's house, and we stayed there for six months after Hurricane Katrina.

When we returned home, it was bad. The water line was above my head. The refrigerator was in the dining room. It really didn't look like "home." We had just moved there two years ago. I didn't have any friends there; it was weeks before we got electricity. I just remember everybody being outside. Playing and helping each other clean up and pick up limbs in each other's yards for awhile. I remember everybody pitching in where they could. We all ate together ... fish fries ... grilled food. Me and my brother had bikes, and we hung out with new friends all day. I have friends that will always be my friends from that time. When I go home for Thanksgiving or Christmas, we always link up.

I remember when I had a walk-in closet at my Grandma’s house. I had a desk on the inside, and I would lock myself inside the closet and write stories. I had journals and books full of stories. But, Hurricane Katrina took my Grandma’s house. Pretty much everything was ruined. She lived in what was called the “Back Bay.” My Dad tried to save my journals, but they had so much water damage and mud. I don’t write anymore, partially because of that. The only things that made it through the storm was a family pic and a stuffed animal I got from my uncle. My uncle passed just before the storm.

I was like the bad child. I always seemed to get in trouble right before my birthday. Every year, it never failed! But, I would normally celebrate with my sister. Her birthday is on Sept. 18, and my birthday is on Sept. 20. But, my mom used to say I wasn’t getting anything whenever something bad would happen. But I don’t even remember my birthday the year of Hurricane Katrina. Because it wasnt “special.” And I’m still pissed about it.

Nothing was the same. While my Dad stayed to rebuild our home, which was completely gutted, we went to stay in South Carolina with my Grandma for a couple of months. Over the summer, we went to visit my Dad, and we stayed in a FEMA trailer. I was bored. I actually made a video. I remember saying, “This is how small the FEMA trailer is,” and I put my hand up to the tub, and you could see how small it was. I walked inside the house while they were rebuilding too. I was so bored.