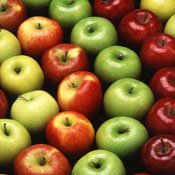 Jackson's blazing summer heat has finally begun to subside; cooler evenings provide much-needed relief; and the first blush of the season has started to tinge the trees along the Natchez Trace. It is the perfect time to take advantage of fall's abundant produce by visiting one of the area's farmers markets. Mississippi's apple orchards are bursting at the seams with familiar varieties and those common only to this region—from Royal Gala and Redchief Delicious to Osark Gold, Mollie's Delicious and Arkansas Black.

Apples are so commonplace we tend to forget their diverse history. Hybridization, the advent of commercial refrigeration and more effective modes of transport in the 20th century supplanted the need for long-term personal storage. But apples were a staple of the colonial American diet because they could be kept fresh longer than any other fruit—as long as six months under optimal conditions—and they sometimes meant the difference between surviving a harsh winter and starving.

Experts believe apple trees may be one of the earliest cultivated. They credit Alexander the Great with finding dwarfed apples in Asia Minor (300 BCE), which he brought back to Macedonia where they became the progenitors of dwarfed rootstocks. Farmers slowly improved and created the apple's 7,500 known cultivars through selection for thousands of years. Winter apples (picked in late Autumn and stored just above freezing) were an important food source in Asia and Europe for millennia before colonists brought seeds to the new world in the 1600s.

During the colonial era, folks consumed apples in numerous ways: from hand, fried in lard for breakfast, fashioned into pies, applesauce and vinegar, baked, pressed for cider or fermented into brandy. They fed any unpalatable fruit to chickens, pigs and milk cows.

Hard apple cider, a staple in Great Britain since the time of the Celts, was the most popular alcoholic beverage in colonial America. Cider was relatively easy to make, apple trees grew in abundance, and drinking it was preferable to well water, which was often contaminated. By 1629, Virginia and the Massachusetts Bay Colony already contained scores of orchards, and for enterprising farmers, the fruits went into producing hard cider.

Cider remained popular well into the 1800s due in large part to the efforts of John Chapman, the legendary "Johnny Appleseed," who personally planted many of the apple trees in the midwestern United States.

Powerful Health Properties
Apples, often relegated to humble fruit status, are unique in how they combine nutrients, making them an excellent choice for achieving health goals. In fact, apples' exceptional combination of fiber, flavinoids, and antioxidants can aid in lowering cholesterol and decreasing asthma symptoms and can play a role in prevention of cancer, macular degeneration and Alzheimer's disease.

The pectin in apples supplies galacturonic acid, which lowers the body's need for insulin and may help in the management of diabetes. Additionally, the high levels of vitamin C and free-radical fighting Quercetin in apples make them an idea fruit for individuals focused on skin health. They may be used in various forms and concentrations to achieve lasting benefits. Skin treated with apple-derived products is often left exfoliated, glowing and acne-free.

You can make simple face masks from apples so that your skin can directly absorb vitamins A, B and C. Likewise, use apple-cider vinegar to treat acne because of its ability to rid skin of bacteria and oils, balancing pH levels. Make a natural skin toner with granny smith apples to give tired and stressed-out skin a fresh glow.

Did you know?
• Archaeologists unearthed charred apple remains in Swiss Stone-Age lake dwellings and at a dig near Jericho in Jordan dating to 6500 BCE. They also discovered dried apple rings in the tomb of Queen Pu-Abi (2500 B.C.E) in Southern Iran.

• Roman statesman Pliny the Elder (circa 23 C.E.) described 29 apple cultivars in his writings. He also speaks of people in "Farther India" who "eat naught and live by the smell of apples."

• "An apple a day keeps the doctor away" comes from "To eat an apple going to bed, will make the doctor beg his bread." Stewed and eaten at bedtime, people used sour apples to alleviate insomnia and constipation. They applied rotten-apple poultices to sore eyes and made hand salves from a combination of apple pulp, lard and rosewater.

• Young girls—particularly from Scotland, Ireland and the American southeast—would peel an apple in a single strip, then fling it over their left shoulder, believing when it landed, it would spell the initial of their future husbands' name.

• John Adams was known to regularly drink hard cider at breakfast to soothe his stomach.

• The crabapple is the only apple native to North America.

Apple Face Masque
Blend a tablespoon of applesauce with a tablespoon of wheat germ. Mix to form a slightly gritty paste and massage into cleansed face and neck avoiding the eyes. Allow the masque to dry for 10 to 15 minutes. Remove with a warm washcloth and splash face with warm, then cold water.

Granny Smith Toner
Core one Granny Smith apple and remove the seeds, but leave the peel on. Cut the apple into small cubes. Combine it with a half cup of lukewarm water and bring it to a boil. Remove from heat and allow mixture to cool completely. Strain it through a colander or fine sieve into a clean bowl. Stir in a quarter cup of witch hazel. Apply the mixture to your face with a clean cotton ball, or spritz it on using a spray bottle.

Cider Vinegar Acne Solution
Soak a clean cotton ball in a dilution of eight parts purified water to one part organic, unfiltered apple cider vinegar. Gently moisten your face with the mixture once a day.