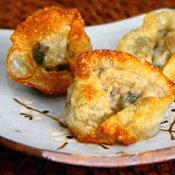 The layman's term for gyoza (gyoh-ZUH) is potsticker, those little meat-filled dumplings you can order steamed or fried as an appetizer at your favorite Asian restaurant. Gyoza originated in China and found their way to Japan in the late 17th century.

You can cook gyoza in several ways: deep-fried, boiled, steamed or pan-fried. Connoisseurs eat the deep-fried dumplings (age-gyoza) as finger foods, while enjoying the soft, boiled gyoza (sui-gyoza) either hot or cold. Steamed gyoza (mushi-gyoza) are also soft, but diners usually eat them hot. The most common way to cook gyoza is pan-frying (yaki-gyoza). Cooks first fry the dumpling on one flat side, creating a crispy skin. They then add water and seal the pan with a lid, steaming the upper part of the gyoza.

Making homemade gyoza is easy. Traditionally, after filling a dumpling wrapper, you pleat the dumpling's edges, causing the dumpling to resemble a little purse. This is a skill that takes some practice to master (and one that I am still not very good at). Assembling all those tiny dumplings can also be time consuming. Luckily, you can store uncooked gyoza in the refrigerator for up to two days and cook them up quickly for an easy lunch or snack.

The recipe below includes the most common gyoza filling: ground pork, minced garlic, cabbage and ginger. You can easily vary the recipe can to include a wide variety of fillings, including ground beef, shrimp or diced vegetables.

Place cabbage in a large bowl. Sprinkle with the salt and allow to sit for 10 minutes. Squeeze cabbage firmly and drain excess water. This will prevent your dumplings from becoming mushy. Transfer the cabbage to a large mixing bowl. Add the pork, ginger, garlic, green onion, miso, sesame oil, crushed red pepper and sugar. Mix everything together with your hands until all the ingredients are evenly distributed.

Alternately, wet the edge of half of the wrapper. Fold the wrapper over to enclose the filling and press firmly along the edges to seal, forming a half moon. Bring the two corners of the wrapper together and pinch so that the dumpling will stand upright.

In a large skillet with a tight-fitting lid, heat one teaspoon of sesame oil over medium-high heat. Place as many dumplings as you can into the pan without the dumplings touching each other. Cook the dumplings for three minutes or until nicely browned on the bottom.

Once the bottoms are browned, carefully pour in 1/4 cup of water. When the splattering stops, drizzle in 1/2 teaspoon of the sesame oil around the edge of the skillet. Place the lid on the skillet and lower the heat. Simmer for two minutes or until the wrappers appear slightly translucent and the meat feels firm. Remove lid and continue to cook until all the water has evaporated and dumplings do not stick to the pan. If they stick to the skillet, remove the skillet from the heat and replace the lid for 1 minute.

Remove the dumplings from the skillet and serve hot with dipping sauce.