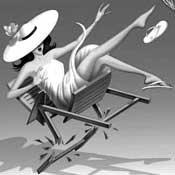 Carolyn Haines' newest book, "Bone Appétit" (St. Martin's Minotaur, June 2010, $24.99), is reminiscent of the classic Nancy Drew mysteries, but with a whole lot of southern sass and kick-ass thrown in. This murder mystery, the tenth in a series, is set in Greenwood.

Sarah Booth Delaney, private investigator and the main character, and her business partner and best friend Tinkie Richmond take a trip to Greenwood for some rest and recuperation at the Alluvian Hotel in the hopes that Delaney will recover from a recent miscarriage and her subsequent depression. They plan to take cooking classes at the Viking Cooking School, but upon arrival, they find that a competition is underway for the next spokeswoman for the school. Delaney and Richmond find themselves surrounded by beauty contestants, and soon afterward, murder.

After the first murder, which involves poison often used in witchcraft and black magic, fingers immediately start pointing at the mysterious Hedy Blackledge, a contestant from Louisiana who is rumored to have a background in voodoo. Hedy hires Delaney and Richmond to prove that she is innocent.

The duo expertly navigates the assignment, often adding to the southern wit and charm that runs throughout the book, but they do hit a few roadblocks along the way. The first is Karrie Kompton, the nastiest beauty contestant known to man. She often threatens to steamroll anybody that gets in her way, which throws Delaney and Richmond off course. Then there are Kompton's constant snide remarks to everyone, including our heroines. Another obstruction in their case is the chief of police in Greenwood, Chief Jansen, who insists for the first half of the book that Hedy is the murderer and who can't stand Delaney and Richmond trying to prove otherwise. Hedy's sketchy past does not help the case much either.

One of the most interesting aspects of the novel, however, is Delaney's navigation around and resistance to the southern code of female conduct that still, unfortunately, pervades much of southern culture (women will obey men, women will act as "ladies" at all times, etc.). Delaney's fiancé wants her to give up private investigating, but Delaney resists; she believes investigating is part of her, and she shouldn't have to stop just because her man wants her to.

Haines' handling of Delaney's situation shines a light on what many southern women often go through: being a strong and intelligent woman in what often seems to be a man's world. Some women, like Richmond, find ways around this problem by giving men "the illusion they have control." But Delaney can't accept a life of subservience to men, even if it is only artifice: "‘I can't pretend, and I won't manipulate my life partner,'" Delaney tells Richmond.

Haines' novel is definitely a page-turner. It's not only gripping, it's a fun book to read. Books set in the South, especially in Mississippi, always hold a special place in my heart. There's something touching about seeing places in print where I've been: Ground Zero Blues Club, the Blues Museum and Turnrow Book Co. are just a few places Haines mentions.

The author also makes an art out of writing about the Delta.

"Driving through the early-summer night home to Zinnia, I felt the Delta rise up around me like the walls of a familiar room. I knew this land the way a devotee knows the contours of her beloved. The taste and smell of the cotton fields were a huge part of my tactile memory. Riding through the night with the stars pulsing in the sky, I had such a sense of home."

I highly recommend Carolyn Haines' book. Though throughout the book there are hints that the Delaney Detective Agency is unraveling due to Delaney's own miscarriage in the last case and Richmond's near-death experience in this one, I can't help but believe Delaney will go on investigating, even if her setting or role does shift a bit.