Where Comfort and Edgy Meet 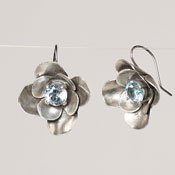 From modest, everyday wear to bold statement pieces, jewelry-maker Cecile Bartlett crafts pieces that practically anyone would be able to wear to jazz up an outfit.

Every Halloween when she was a child, Cecile Bartlett would dress up in her grandmother's enormous collection of costume jewelry and transform herself into a gypsy. Her desire to wear jewelry all the time, though, often ended up getting her in trouble. Her mother threatened to wring her neck when she came home with her pearls ruined from swimming or riding horses wearing them.

Now a fine-art jeweler, Bartlett says her interest in jewelry began with that collection. As this Jackson native, now 38, grew older, she became more and more frustrated with jewelry that fell apart easily. "It was hard to find stuff that was different," she says. "And just trying to find a good pair of hoops that were the right size that didn't make your ears turn black or hurt was impossible."

Bartlett's childhood memories and her desire for sturdier jewelry, combined with her loathing for shopping, eventually led her to try making jewelry herself. She first experimented with beadwork in the late '90s but quickly became bored with it.

In 2005, Bartlett took a metal-smithing class under the tutelage of Betsy Liles, owner of B. Fine Art Jewelry. The same year, Liles opened her first studio and asked Bartlett if she wanted to rent a space from her. Bartlett was flattered and worked in Liles' studio for three years.

At first, Bartlett refused to put her first name on her work.

"I didn't want anyone to know who I was. I didn't want people to buy it just because they knew my mom or something, or they were like, ‘Awww, how sweet,' or ‘Awww, bless her heart,'" she says, laughing.

She tried putting her middle name, Legendre, on her work, but that didn't work.

Liles eventually convinced Bartlett to put her first name on her work, and ever since, she has tagged her jewelry with her first name, though still with complete modesty. "I love talking up other people's things, but I don't do a very good job with mine," she confesses.

"I'm definitely not an artist with a capital "A," she says. "I'm not cool enough."

The only time Bartlett hints she has talent is when she speaks about her mother's visits to her studio in Flora. "She tries to be sticky fingers," Bartlett says of her mother. "I know something is good when she tries to leave with it."

But even if she won't ever admit it, Bartlett's work is amazing. She uses lots of natural stones in odd shapes and sizes, and puts them in unique settings in rings or earrings. She also fabricates almost everything. Fabrication, she says, is making everything yourself starting with sheets of metal and wire, instead of buying the component parts. Bartlett melts and hammers the metal (usually silver).

"That way," she says, (the stones) don't have to be a certain dimension. It gives you a lot of freedom. You can do anything." And Bartlett will do anything. Her pieces range from tiny earrings that can be worn every day to large, edgy rings that make bold statements.

"I do small, and then I do big. I get to be almost schizophrenic," she says jokingly.

Bartlett finds inspiration in imperfection. "Taking something that may not be seen as valuable or beautiful, and creating an environment or setting for it to show its beauty is the real accomplishment," Bartlett explains.

The artisan also takes into account wearability when making a piece. She considers everything from comfort to how a stone will rest on the finger.

"I don't ever want to make something that somebody's going to have to worry about. I hate the idea of not being able to wear something because it's too fragile," she says.

One of the biggest compliments Bartlett says she ever got was from a lady who told her she had thrown out all of her other earrings because Bartlett's were so comfortable. "It's not the most expensive thing she has in her closet. It's not the greatest piece ... but it's that go-to thing. That was really cool," Bartlett says.