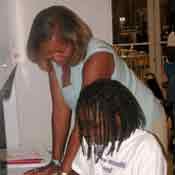 Since Virgie Peterson, 12, joined the New Focus For Youth Intervention program at the Jackson Medical Mall last fall, she went from being a C student to becoming a straight-A student.

Peterson, a rising seventh grader from Brinkley Middle School is one of 15 at-risk students enrolled at the New Focus program, which started in September 2009 through a grant from the U.S. Department of Justice that funds the program through June 2011. New Focus works with sixth graders from Brinkley Middle School and ninth graders from Lanier High School whom school administrators have identified as having behavioral or academic problems.
Peterson says she didn't feel comfortable talking to anyone in her classes, making it difficult for her to ask for help.

"When I started school, I got teased and I didn't have anyone to talk to," Peterson says. "When my principle introduced me to the teachers at the program, I realized I just needed some attention and started feeling comfortable. I really caught on to it."

Program director Dr. Ollye Shirley, who worked with the Children's Television Workshop on PBS for 25 years, wanted to improve the lives of young people Jackson. She started the program with the goal of decreasing the Jackson Public Schools drop-out rate, improving students' GPAs, and getting students interested in going to college. Shirley says since last fall, 85 percent of students' grades have improved.

Shirley recruited her daughter, Erin Shirley, as the program's Assistant Director, and she hired four retired teachers, a counselor and a parent educator to help with the program. Erin Shirley has a background in electrical engineering and worked in the automotive industry for 14 years. She came on board at New Focus after Delphi, the plant she worked for closed. The retired teachers' primary subject areas are math, English, social studies and science. The parent educator, Ms. Kisiah Nolan, is also the school board president for Jackson Public Schools.

Inside the Jackson Medical Mall's Thad Cochran Center, computers line one wall and several round tables fill the room. The students work on their homework or projects from school and get assistance as needed from the teachers on hand. After homework is finished, they can use the computers to play extralearning.net educational games to reinforce the subjects they are studying.

Erin Shirley says she is amazed with the turn-around she has seen in the students' behavior since starting the program.

"When they first started coming here, we had so many that were just angry. They would pick fights with each other, argue with each other, call each other names, and we've gotten to the point where that's no longer happening," she says.

The mother and daughter team have big plans for New Focus. Ollye Shirley is looking for additional funding so that all of the students can stay in the program until they graduate from high school. They want to recruit more students and make the program available to all schools in the area. They also want to start taking the students to museums such as the Children's Museum in Jackson and the Civil Rights Museum in Memphis.

"We want to expose them to a lot of different things that they are not exposed to around the area. A lot of the students have never been outside of their neighborhood," Erin says.

This is one of the greatest stories ever told! Thanks to Dr. Ollye Shirley and her vision for troubled youth in this community. Many who for so long have needed this type of intervention are now being able to finally get it. My hat also goes off to Erin, daughter of Drs. Aaron and Ollye Shirley for her dedication to this project. I must also include Dr. Aaron Shirley who is the founding germ of the "Medical Mall". I was so angry when Gayfers, Penney's and some smaller stores left the "Jackson Mall". Now we can say, "Thanks you for leaving" because someone with a greater vision was able to create an unbelievable OASIS! Thank you! Thank you! Thank you!