[Artist to Watch] Noo Noo: Doing it All 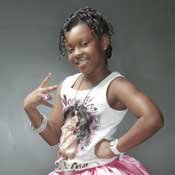 Alysyia Terry, aka Noo Noo, is a 10-year old rapper who values education and her role model status.

When talking about the big names in rap today, you'll hear names like Jay-Z, T.I. or Lil' Wayne. Rap is a male-dominated genre, and it isn't often that ladies get credit for their lyrical ability and rap skills. When they do, they create a big buzz. And the few buzz-worthy female artists with large fan bases often call themselves the best. But neither Trina nor Nicki Minaj has yet to meet Jackson rapper Noo Noo.

Alysyia Terry—Noo Noo is her stage name—is a triple threat who raps, acts and dances. And at only 10 years old, she has lots of time to grow. She is a full-time student and part-time rapper, and is as talented as emcees twice her age. She sets a good example for her peers, too.

Noo Noo began rapping when she was 7, sending out raps for invitations to her birthday party instead of traditional invites. She's been making music ever since.

The emcee's song "Do Da Noo Noo" has gotten lots of airplay on the radio, and the video has thousands of views on YouTube. The video, which was shot at Gary Road Intermediate School in Byram, features the fashionable pre-teen, who also goes by "Lil' Rich Girl," pulling up and exiting a shiny white Mercedes. She then proceeds to demonstrate the song's eponymous dance, Da Noo Noo, in her school's hallways.

Noo Noo's music is easy to dance to and fun to listen to; she describes it as "catchy and exciting."

Her fans are small but large in number. At her 10th birthday bash May 29, hundreds of excited children packed into Jackson's Club Mardi Gras to celebrate and party with her. Featuring performances by Ray Nitti and Tha Joker, it seemed more like an episode of MTV's "Super Sweet 16" than the typical party for someone who has only lived for one decade. Then again, Noo Noo is not a typical 10-year-old.

The young girl considers herself a role model and values a good education. Her song "You Gotta Believe" speaks to those values. "If you don't stay in school you can't get a good job/You need to stay in school so you can go many big places and just follow your dreams," she raps.

Even though she enjoys rapping, Noo Noo, whose favorite subject is math, puts her homework before her hobbies, chief among them, playing soccer.

"It's not really hard because I still make time to study. I am still a straight-A student," she says of the balancing act she performs, juggling school, her hobbies and rapping career.